The holiday weather in the south of the North Island wasn’t very nice for beach going or really anything much outside, so apart from a few days with family my days were largely spent at home and hence in the garden.

Sadly bad weather doesn’t deter the usual army of marauding summer pests and you have to remain vigilant. The recently planted Azalea Alines have a case of “freckles”, the result of visits during the night by the diminutive Bronze Beetle. This little guy flies in undetected for a few weeks and munches away. By the time you notice the damage, he has long departed. The damage is only cosmetic and the plants will respond with fresh new leaves in autumn.

A pest I loathe is the passionvine hopper. In my garden they tend to gather on the Puriri tree and the neighbouring native Clematis but this year they’ve shifted their attention to my potted rose “Jacqueline du Pre”. Hoppers suck on the sap of plants and leave a sticky sugary residue which is loved by sooty mould.

The baby hoppers are ‘affectionately’ called “fluffy bums” and spring away at any disturbance, making them very hard to squash or target with spray. And they will always return so a jet of water on them only delays the inevitable. Best control is achieved in the winter months by trimming and burning twigs and tendrils on which eggs have been laid.

Little piles of sawdust appeared under my potted lemon tree recently. The culprit here is the grub of the Lemon Tree Borer beetle, and is a difficult pest to control.

The grub burrows his way up inside the trunk of the tree, working away like a miniature drill and hence creating the sawdust. Because he is so well hidden in the stem, normal spraying won’t touch him.

On a brighter note, one of my treasured plants is flowering – the rare native broom Carmichaelia muritai. The flowers are tiny purple and white versions of the pea flower, held in clusters above the needle like leaves – beautiful to see when covered in flowers and exquisite in close-up.

The lovely Liriope muscari are in flower too. They are excellent filler and border plants for dry shade, and the dark strappy leaves look good all year round. I noticed the Green Leafhopper on this plant but suspect he was just passing through and not a dinner guest.

So now the pests have been dealt with I can go back to planning my dream garden. 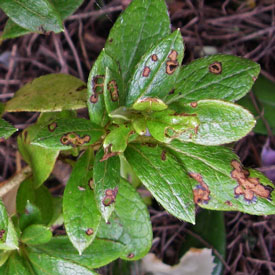 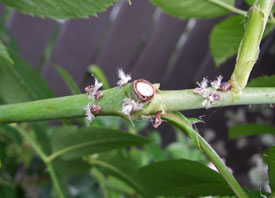 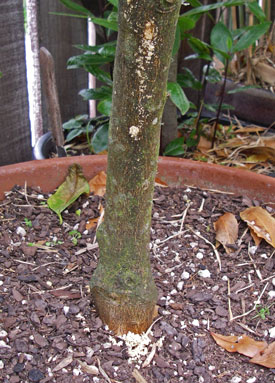 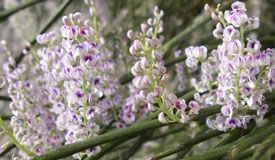 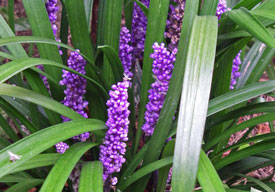