Sorting out the seeds

How many seed packets is too many?  I have 142 - but this only includes the ones I could find.  There are bound to be a few packets tucked away in unlikely places, left there as I came inside from a seed sowing session in the garden last spring and promised myself I'd put them away.

The need to do something gardening related – anything at all, in the midst of the winter weather, where the problem lies in that I don’t actually want to go outside to do it, naturally has me reaching for my seeds, to sort them out, plan for the season and just dream of how tasty they will be one day very soon.

No sooner had a got my seed containers out, I realised I had a problem – vermin.  A nasty mouse had snuck its way inside and into my seeds!  I blame the cat.  The ideal storage for seeds isn’t an open top plastic container, no matter how pretty.  I had heard tin was best, but I was under the impression that was for outside in the shed storage.  But in or out, a mouse proof container is essential!  It doesn’t hurt to also have some of those little desiccant bags of silicon beads that come with shoes and handbags and a range of other products.  I may need to go shoe shopping…  It’s for the seeds! They like is safe from rodents and dry.

They also prefer it cool, so I need to look at where I have been keeping them to make sure they aren’t getting a heat burst from the midday sun or too close to the heater warming my toes in these dreadful winter days.

So I bought myself a tin – a biscuit tin would do, but to house all my seeds I needed a big tin so I brought a bread tin and set about making some sort of logical sense of my seeds.  I toyed with the idea of having them in order of when they should be planted out but that would probably put most of the seeds in September and none in January.  Besides I would need to be diligent with returning them to the tin to take into consideration succession planting and to be honest I don’t think I can trust myself to do that.  I need something simple.

I like things neat and tidy in some kind of logical order so I thought about alphabetical and this has worked for me in the past, but not that well, as if it was so easy there wouldn’t be random seed packets dotted about the house.

Finally I struck upon the plan to pop them all together with their bed fellows.  I have a few beds (about 30-ish) and as each is pretty much a monoculture it makes sense to me to group them together as each bed will roughly be planted at the same time.  I just need to grab that section when I need it with no real sorting out where they need to come from or go back to.
Next I examined the packets themselves and some looked like they had had a hard life, and unsurprisingly when I turned them over I discovered the best before date was years ago.  So I bravely threw a load out, not before noting down what they were so I could buy more.   This would explain why my germination rates were a bit hit and miss.  Apparently seeds don’t last forever!

I have begun writing the year on the seed packet when I buy them so when I do my seed sort it is easy to tell which ones to throw out.  Some seeds last a long time like tomatoes and brassicas – when stored correctly can last up to 5 years, but onions and parsnips really need to be fresh.  I shall be ruthless when the time comes and throw out aging seeds.

With the seeds sorted I can now go on to plan what I want to grow, and between the seeds I threw out and the new things I want to grow there seems to be a gap or two in my collection.  A trip to the garden centre is imminent! 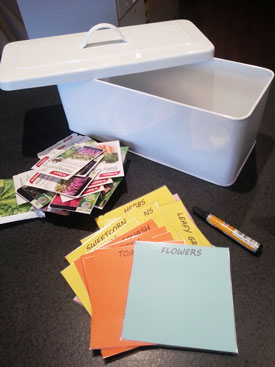