Growing for the summer harvest

I envy gardeners living in warmer climes with ideal growing conditions who have broad beans to pick in October and tomatoes in November. My vege gardening is very much a battle with the wind and cooler temperatures. But I am winning the battle with the soil.

When I started my vege garden some 7 years ago it was a bed of hard clay and stones. Over the years I’ve picked out the stones as they come to the surface and added horse manure, sea-grass (a fine version of seaweed which makes lovely mulch), winter green crops and all the kitchen vege scraps dug into trenches. The soil is now friable and rich with worms – the big fat native variety.

The total space I have dedicated to growing veges is about 10 sq metres so I grow only my favourites – broad beans, peas, potatoes, tomatoes, zucchinis, herbs, scarlet runner beans and dwarf beans.

The broad beans have been flowering for a few days. The seed were sown in August (my Nana always said to sow in the months beginning with A - April or August) but they took four weeks to germinate! So they are short plants which is a bonus in the windy spring weather.

Peas were sown in August too but the first lot failed to germinate. I’m a firm believer in using only fresh seed – often seed from last year’s packet just doesn’t perform even if the packet says “good to” this year. So after a second sowing and with regular watering, the peas are shooting skywards, with flax stalks to provide support.

Growing potatoes is an annual event. I love the surprise of what is hiding in the soil under the leafy tops. This year I’m trying Purple Passion and just three plants of a new variety called Victoria. As the shoots grow, I’m mounding them with stable straw but I may regret this. I read recently that purple skinned varieties have a tendency to develop scabs on the skin when grown this way – only time will tell.

Tomatoes are always a challenge in my environment. I sowed seed in toilet roll pots and germinated them over the warmth of my son’s tropical fish tank. They developed very slowly into something that was just big enough to plant out in November, sheltered with their own mini cloches made from recycled 3L juice bottles with the base cut off and caps removed.

A Tasty Tom plant gifted to me in October was planted early with fingers crossed for good weather. I put some shelter cloth around it and it’s now flowering. Tomatoes are "self-pollinating" plants. This means the pollen from the male stamen falls onto its own female stigma. Bumble bees are very good at helping this process because of their size – as they land, they vibrate the flower which helps transfer the pollen. The same can be done by hand by gently tapping the flower stem a couple of times a day.

With my limited space, I always grow upright varieties of tomatoes which need staking. Some years ago I invested in some sturdy metal spiral stakes that are perfect for tomatoes. As they grow you simply weave the stem around the spirals and they become self supporting – no pantyhose required!

The success of my summer harvest is now conditional on the weather. If it is kind I’ll be picking early and getting good crops; if it’s not, well, I might be wishing I lived somewhere else … 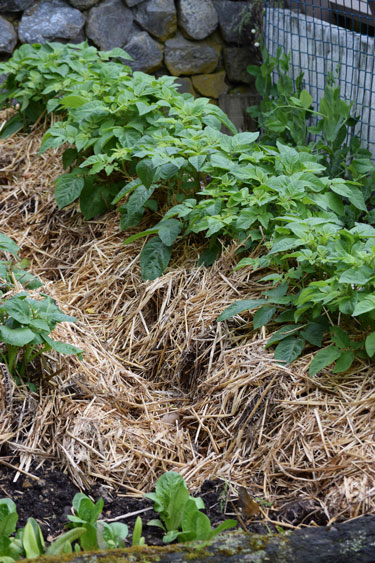 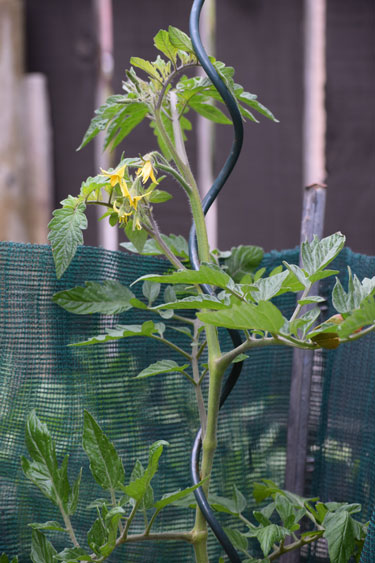