Jenny and Guy Oakley’s beautiful established garden is one of Taranaki’s finest. It has been a highlight of the Taranaki Garden Festival for over 30 years. The large farm-sized garden is divided into intimate garden rooms, so there is plenty to inspire those who garden on a smaller scale. In particular, each of Jenny’s glorious hanging baskets, suspended from trees and pergolas, is a complete work of garden art in itself.

Every spring Jenny fills several car boot loads with punnets of flowering annuals for her baskets. They are intensively planted and meticulously cared for throughout the spring and summer season.

“No matter whether your garden is big or small, hanging baskets add a whole extra dimension and there is nothing like flowers to make you feel good,” says Jenny.

“I believe flowers are really special and when you plant them in hanging baskets you get to fully enjoy them. It’s great to have something happening at eye level,” she adds.

She also enjoys a view of her hanging baskets from inside the living room. “In spring the soil is still warming up, so flowers planted in baskets, where it is much warmer, always grow so much faster. When I plant a punnet of flowers in a basket they always all survive, whereas I might lose some when I plant in the ground in early spring.”

For early spring Jenny says you can’t beat hardy pansies, violas, lobelia and alyssum. She plants non-trailing forms of these annuals to create a dense allover tapestry of flowers. When she has slightly taller annuals like antirrhinum (snapdragons) or dwarf cosmos she will plant them in the top of the basket. And she always includes a few foliage plants. “Cineraria Silver Dust works brilliantly with flowers and parsley is particularly good,” she advises. “It gives the trailing flowers something to lean against.” Also, these days Jenny is enjoying the different colours of heucheras in her hanging baskets.

For summer, Jenny’s favourite basket plants are petunias and impatiens. The impatiens are ideal for the baskets that hang in her trees as they flower brilliantly in the shade. Fuchsias and heucheras also do well in summer shade and she often plants drought hardy mondo grass in the sides of her summer baskets.

While Jenny tends to plant her baskets in August or early September, and often not again until December, she says, a basket planted in October can easily make it through till autumn with regular feeding and a bit of grooming to remove spent blooms. “Some things will peter out as other plants fill the space. Lobelia planted in September, for example still looks amazing in late spring, and by the end of summer the impatiens or petunias take over, filling the entire basket.” October is the earliest she would plant petunias or impatiens in her climate.

Sometimes a basket planted in early spring needs a quick mid-season face lift to carry it through the summer. Jenny has devised a clever way of doing this. At planting time she plants the top of a basket with a flowering plant, leaving it in its pot (a ‘potted colour’ sized pot of about 10cm diameter). Mid season, this pot can be lifted out leaving a perfect planting hole without damaging any of the surrounding roots. The replacement plant is simply removed from its same-sized pot, popped into place and watered in.

When Jenny and Guy first began their coastal garden, it was not a hospitable place for many plants, let alone hanging baskets. But wandering around the garden these days you could be forgiven for forgetting that the open sea is within walking distance. Such is the success of the shelter they planted 37 years ago.

Jenny’s baskets hang in the extra shelter of the north side of the house, under trees and above the sunny deck where there is just enough breeze to help keep the bugs away. “I always hang my baskets as soon as I plant them so they can harden off and adjust to their location.”

The trees offer some protection from frosts but Jenny uses frost cloth (held on with clothes pegs) if the need arises.

Most of Jenny’s baskets are 45cm in diameter and she wouldn ’t recommend anything less than 40cm. She has learned not to bother with smaller baskets, which she says dry out too easily. As well as moisture, the bigger your basket the more nutrient it will hold and the better you plants will grow. What’s more, the bigger the basket the more spectacular the display.

Jenny looks out for old wire baskets second hand shops. She will sometimes replace a chain with a stronger one. Some of Jenny’s baskets are over 60cm wide but she is quick to remind us that big heavy baskets need strong supports. Her biggest baskets can take three people to lift them into position. She will often finish off the final layers of planting after a basket is hung.

A new kind of liner

Jenny’s baskets have open sides so that she can plant both the sides and the top for a beautiful fully rounded basket of blooms. This kind of basket requires a liner and she has experimented with a range of options over the years.

Sphagnum moss provides outstanding water retention but it doesn’t come cheap and the birds also find it very attractive. Jenny has found the same problem with coconut fibre. Though generally less expensive, her feathered friends find it irresistible for nest building. “I love them to bits, but they are such terrible thieves, especially the waxeyes!”

So she has devised and refined her own liner system using folded strips of hessian fabric, which she buys by the metre at Spotlight. It’s cheap and looks nice, but best of all, the birds can’t steal it. She also uses weed matting but finds natural hessian more attractive, even though the end goal is for the plants to hide everything.

Jenny always fills her baskets with fresh, top quality planting mix. To this she adds slow release fertiliser and a wetting agent (unless the potting mix already has this in it).

She has never installed irrigation for her pots and baskets, preferring to water by hand. “I can do a much better job with my watering wand, making sure the water gets where it needs to be. It also gives me the time to really look at my plants and check for anything that needs fixing.” If she spots a pest problem, such as aphids, she can deal with it straight away before an infestation gets out of hand.
She will thoroughly soak each basket, moving onto the next one while the water soaks in then topping up again until the water runs out the bottom. “I catch it in a bucket so I can feed other plants with any fertiliser that washes out, and I put my hosta pots under the hanging baskets”.

Because of all that watering, Jenny has found she gets the best results using a longer term fertiliser. “I now use a 6 to 9 months fertiliser. I use it at planting time and add more during the season, sprinkling it over the top every 4 to 6 weeks or whenever I think the plants look like they need a feed. The more plants flower, the more food they need to keep them going.”

For more on how to plant a hanging basket Jenny's way, and ideas for plants to grow, click HERE

Look for these products, tips and advice at an Go Gardening garden centre near you. 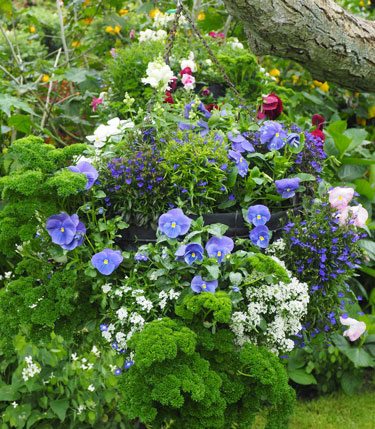 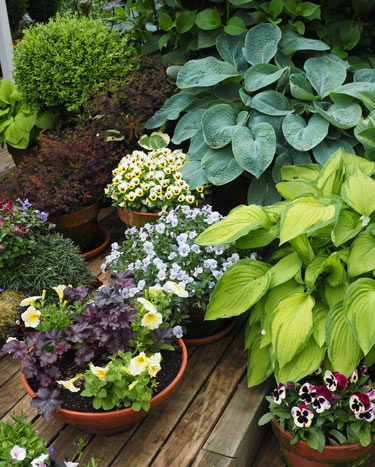 Jenny catches the water from her baskets to feed other plants with the fertiliser that is washed out. 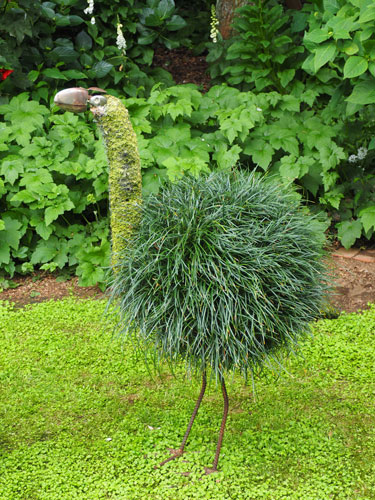 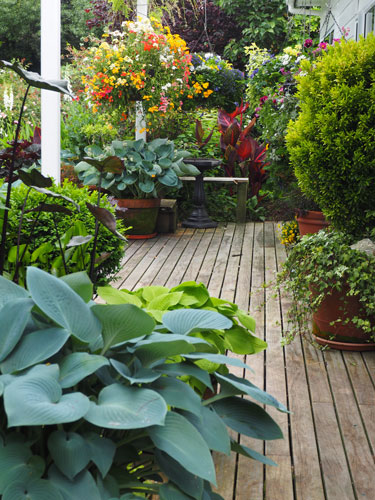 Jenny & Guy Oakley's garden is open every year during the Taranaki Garden Festival.