As gardeners, there is much we can for the good of our planet. Sarah Thornton meets a gardener who’s championing the cause to help our bees.

In a suburban Havelock North street, a garden is abuzz with the sound of bees foraging for nectar.  More and more beehives are now making their homes in our residential gardens and that’s good news for the threatened pollinators, whose survival hangs in the balance.

Making her contribution to the survival of the bee population is Landscape Architect and Environmental Planner Janet Luke.  Her urban garden is both functional and beautiful and spread over a quarter-acre, it features vegetable plots, fruit trees, roaming chickens and two beehives.

Through her business Green Urban Living, Janet is passionate about the plight of the humble bee, educating people on how they can help the survival of nature’s ‘spark plugs’.

“Bees are incredible.  A third of all the food we eat is pollinated by them,” says Janet.   “Bees are crucial to New Zealand’s primary sector, responsible for pollinating five billion dollars’ worth of crops every year.  Unfortunately, with mono cropping, the increasing use of pesticides and the invasion of the varroa mite, the bee population is at serious risk of becoming extinct.  But we can play a part in the survival of these amazing creatures.”

In New Zealand, as across the globe, beekeeping is increasing in popularity in urban areas.

“Urban bees do so much better than rural bees because of the reduced exposure to agricultural sprays and pesticides and the varied source of pollen and nectar, often producing up to three times the amount of honey.  The honey bee Apis Mellifera is such a good pollinator – it goes to the same source and takes the nectar until it finishes,” explains Janet.

Making honey is a tiring job for a bee, which only lives for around 40 days.  On any given day a bee can make up to 25 flights in a radius of five kilometres from their hive, collecting nectar from more than 1,000 blossoms – all for half a teaspoon of honey.

Janet has one of her hives sitting on the balcony just outside her dining room.  Her preferred style of hive is a Top Bar Hive, a century old design where bees build their own comb in ribbons, hanging like curtains.  There are other advantages as she explains.

“Top Bar Hives  require no heavy lifting unlike the common box ones, making them easier to manage for women and the elderly, and the children can view the bees at work through a viewing window.   It’s educational as well as functional.”

According to Janet, there’s a lot of learn if you want to have an urban beehive, but there are numerous resources available throughout the country.

“Hives can be rented or purchased, but all must be registered through AsureQuality.  There are a few basic things to be aware of such as your neighbours and keeping the hive away from washing lines.  The hives also need to be treated for varroa mites and other exotic diseases.   Courses are available through Beekeeper Clubs or just talking to a beekeeper will point you in the right direction.  It’s incredibly satisfying to know you are helping on a local and global scale by keeping humble bees.”

Janet advises leaving honey in the hive over the winter for the bees to feed on when they’re not working, and taking the excess for eating.  “It’s outstanding and without preservatives or treatment, it’s very good for you,” she says.

Planting an attractive haven for bees is straightforward, and involves many of our common garden flowers, vegetable plants and fruit trees.  Avoid planting species that have double flowers or masses of petals, and opt for single-flowered plants and cultivars that are easier for bees to visit.

“Nectar-rich flowers such as Lavender, Verbena, Alyssum and Bee Balm are great.  I also let my lawns grow (much to my husband’s despair!) as clover is a wonderful attractor of bees.  The main thing to remember is to plant old-fashioned plants, not hybrids, as they are much more effective,” says Janet.


Hosting a beehive in your garden might seem like a small step, but for the bees, it’s a major contribution to their survival.

(from the
National Beekeepers Association nba.org.nz)

Rental hives are available from

There are organisations dedicated to the survival of bees: 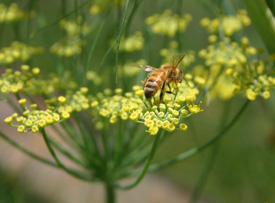 A bee feeding on a fennel flower 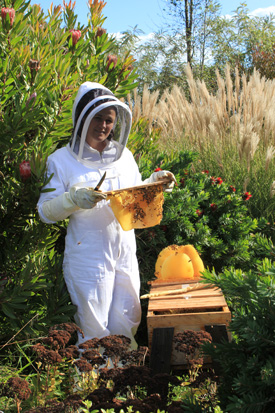 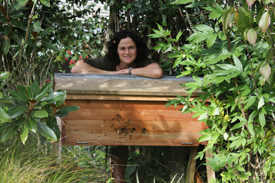 Janet with her Top Bar hive 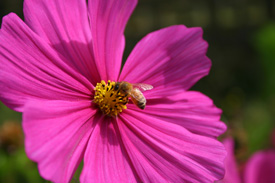 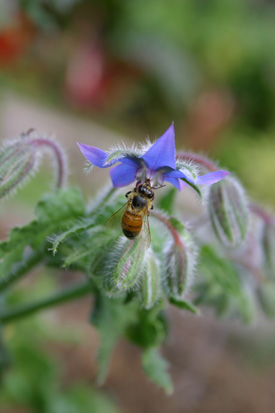