The magic of nectar

I didn't know much about nectar for butterflies when, early in 2007, we were invited to stage an exhibit of butterflies inside the Canterbury Museum. Sure I knew that butterflies (like bees) were sustained by nectar, but not much more.

Finding potted flowers that would keep our butterflies happy was a challenge. We needed them or a vase of cut flowers to provide nectar. Many of the ‘potted colour’ plants (annuals) we bought, although they were listed on websites as providing nectar, didn’t appeal to the butterflies. However, one morning as we walked to the museum we saw a beautiful dark purple Buddleia alive with nectaring Monarchs so we picked a few branches from where it overhung the footpath for the display. Our Monarchs were happy!

A few days later we came across a huge Hebe bush with rich purple flowers which was attracting butterflies and bees. We were told it was called ‘Wiri Spears’ and given a few branches. It worked well too.

Now some of you may remember Jack Hobbs who made appearances on Maggie’s Garden Show (TV1) in the 1990’s. He is manager of the Auckland Botanic Gardens but in an earlier life bred Wiri Spears as well as many other Hebes, and Wiri Spears is known to flower all through the summer. Besides the common Koromiko (Hebe stricta) with its white flowers the Jack Hobbs’ Wiri Collection seem to be excellent for nectar.

The big lesson came a while after our Canterbury display: one day I saw an exotic-looking chrysanthemum for sale. The blooms were frilly purple, very striking, and I thought it would be not only a worthy addition to my garden but would also be loved by the Monarchs. Not so!

What was it about some plants that seemed as though they would be great for butterflies and weren’t, I wondered? I had to learn more. For instance, the potted chrysanthemum* I bought. I learned that single flowers are preferred by butterflies because it is easier for the butterfly’s proboscis to reach into the nectary. Sometimes markings or patterns on the flower called ‘nectar guides’ help the butterfly (and others) to their rewards.

These guides can be visible to humans, for instance, in the simple buttercup flower; the lines standing out on the shiny yellow petals. But mostly the nectar lines are only visible under ultraviolet light. Rudbeckia hirta which looks to us like a yellow daisy with a black centre is quite different under ultraviolet.

Fascinated about all this, I asked more questions. I had a lot to learn… and there’s more still. Geoff Brunsden (from Wildflower World) told me about bumble bees’ nectaring habits.

“Bumble bees can tell if the flower has been recently visited and cleaned out of its nectar by the ‘smelly footprint’ from the previous visitor,” he said. “If this happens the flowers soon fill up again and the footprint wears off.

Thus a flower that is not offering nectar one day may well be full of nectar the next day. He also explained that different flowers refill at different rates.

“Borage, for instance, refills in two minutes,” he added. “Comfrey takes forty minutes, others may take 24 hours. So there will be a preference as to what refills the fastest – but that does not represent which flower is ‘best’.”

“Even the flowers that are slow refilling may have bigger volumes of nectar or better quality nectar.”

* Daisy-type blooms (such as chrysanthemum and rudbeckia) are not made of just one flower. Each daisy bloom is made up of two types of flowers - disk florets and petal-like ray florets. The disk florets are at the centre and the ray florets are at the periphery but they are arranged to give the impression of being a single flower. This arrangement is a type of inflorescence known as a capitulum… but that’s another story!

Written by Jacqui Knight for Moths and Butterflies of New Zealand Trust. For more information about Butterflies or to become a MBNZT member please visit www.nzbutterflies.org.nz. 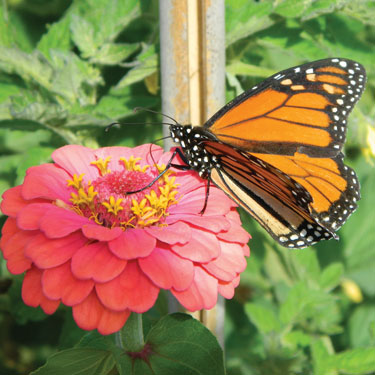 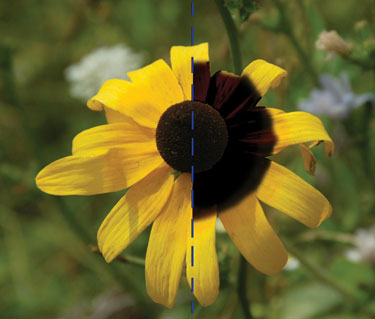