A tale of two breeders

The old fashioned ‘Pink’ is making a comeback as breeders from opposite sides of the globe deliver increasingly beautiful, high performance forms of this romantic garden plant.

As the first New Zealand release of Whetman’s Magnifi-Scent series from England coincides with Dr Keith Hammett’s latest ‘Scent from Heaven’ pinks, an exciting line up of new-age plants is appearing in garden centres all around the country. We’ve never been so spoilt for choice. Even more exciting - pinks have never had so much to offer!

Ideal in pots or as garden edging, these tough little perennials flower their socks off from earliest spring till the first frost, and produce a wonderful perfume in the garden. Grandma’s pinks (aka Dianthus) were darlings in their day, but they were all done and dusted within a few short weeks.

Today’s pinks were expressly bred to deliver far more than their early ancestors were ever able to do. But it didn’t happen overnight.

Dr Keith Hammett has been perfecting his pinks ever since arriving in New Zealand in the late sixties. In Devon England, the Whetman family nursery has been dedicated to the pursuit of the impeccable pink since 1936. As world leaders in the pink breeding business, the two parties are well-acquainted, but their breeding programs are very separate. Running in parallel over the years, each has arrived at high performance plants with excellent growth habits, but with interesting distinctions in their colours, foliage and flower forms.

Whetman’s six cutely named varieties have a delightful ‘Turkish delight’ fragrance. Both series are noted for their excellent vigour and disease resistance. These ultra-hardy profuse-flowering Dianthus tolerate both cold and dry conditions. Their super-compact foliage remains neat and tidy all year round.

Whetman’s nursery is the world’s leading nursery specialising in English ‘pinks’. Many of their varieties have won the prestigious RHS Award of Garden Merit and have featured at London’s Chelsea Flower Show. Managing Director, Carolyn Whetman, says their breeding programme is key to their success. “Many hundreds of plants are carefully evaluated at our trial facility, and only those displaying the most appealing flower, form and fragrance are released for gardeners to grow.” Carolyn is meticulous with regard to quality, and only the cleanest, virus free parent plant material is used for propagating.

In his Auckland greenhouses, Keith Hammett is equally fastidious. Keith explains that his purpose with Dianthus has always been to produce what he calls his ‘little grey hedgehogs’, in other words “compact plants with good longevity that don’t die off in the middle like a balding man”, he says. Disease resistance, prolonged flowering and fragrance are his other key targets. But sometimes things just happen; Keith tells the story of a little single pink. “I tried to ignore the wretched thing but at the end of the season when everything else had stopped, it kept on flowering. I called it ‘Far Cry’ because it was a far cry from anything I was trying to achieve!” But it did well, as did the popular white form, ‘Far North’.

As well as Dianthus, Dr Hammett is also famous for his garden-friendly dahlias and sweet peas. Although many Hammett varieties are grown in gardens overseas, he is proud that his plants are bred “in New Zealand for New Zealanders”.

As we rediscover the charm of fragrance in the garden and revisit the romance of flowers, we still want our plants to be easy-care and flower freely over many months. New cultivars are bred to deliver much more than their ancestors were ever able to do, thanks to the dedication of breeders prepared to spend a lifetime in the creation of the perfect plant.

Today’s pinks are being hailed for their exceptional resilience, long flowering season, and compact habit. Tolerating both cold and drought, all have excellent vigour and disease resistance. 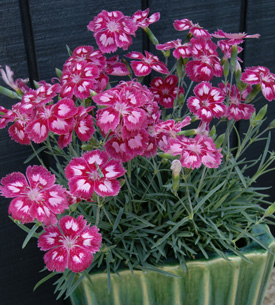 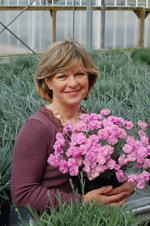 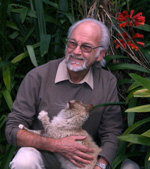