For some crops, it makes sense to sow seed in trays early, for planting out when the weather warms up. However, some plants prefer to be planted straight into the ground when the soil temperatures are perfect for them.  Planted at the right time and in the right conditions, these plants will thrive and become much healthier than the indoor pampered ones.

The sweetest taste of summer has to be fresh sweetcorn, harvested and put straight on the  barbecue in its husk where the plump, yellow kernels steam in their own juices. To experience this pleasure, you need to put in a bit of effort 100 or so days earlier.

Corn grows big and fast and this requires a rich fertile soil to feed the rapid growth. Adding lots of organic matter and well-rotted manure helps sustain this hungry plant, so it’s in the best interests of an abundant harvest to take the time to get the soil just right.  Sowing sweetcorn seeds into a space that has previously grown beans or had a legume cover crop will also help towards a bumper harvest.

Not only should the soil be rich but it also needs to be well drained.  It also needs the ability  to retain moisture as corn is very thirsty and also shallow rooted. If the soil dries out, growth slows down. A good quality mulch will help keep the root zone moist between watering and keep weeds down.  Care should also be taken when weeding so as not to damage the roots.

Because the shallow roots are easily damaged it is best to plant corn seeds directly into the garden, so they can grow a strong root structure for their top heavy plants. You will need to wait for the garden to warm up, as sweetcorn prefers soil no colder than 16-18°C and will rot if it is colder than that.  November is a good month to begin to sow corn.  Even then it can be a bit fussy, so pop a couple of seeds into each hole so you have a greater chance of success and then remove the weaker of the two seedlings.

Corn is pollinated by the wind and in order for a successful pollination rate, which on the plate looks like a fat cob with no gaps, it is best to plant them in a grid pattern to form a block rather than in a row, with plants spaced 30cm apart and the rows within the block 60cm apart.  Even as a block of plants they are vulnerable to the wind, so try to make sure they are in a sheltered spot.  If you want to grow different varieties, make sure they are in different parts of your garden or they will cross pollinate and your corn won’t taste as good as it should.

While corn loves a rich soil, beans prefer it a little leaner.  If the soil has too much nitrogen then you may end up with all leaves and few beans, as the beans themselves are able to fix nitrogen from the soil.   Before sowing beans you need to know if you have dwarf or climbing beans, as the climbing ones will need something to climb on - such as a trellis, teepee or other structure.  It is much better to install the support structure first, rather than trying to put it in after and damaging the roots.

Despite it being easy enough to grow beans indoors in containers, they actually prefer to be planted outdoors directly into the soil and they don’t like being transplanted.  As with corn, the soil needs to be warm enough for successful germination.  Any colder than 18-20°C and they will just rot away.  This just happens to be the kind of temperature where the risk of frost is all but past.
Sow beans about 15cm apart into well-watered soil and then try not to water them again until they germinate, to avoid the risk of rotting the seed. In 8–10 weeks you will begin to have more beans than you know what to do with!

Cucumbers add a cooling crunch to a salad in the heat of summer.  Like corn, these are hungry plants and like a soil rich in organic matter. Your planting spot should also be well drained and sunny.
Cucumbers can be grown vertically as they have surprisingly strong tendrils that will cling to the nearest thing.  And as with beans, if you are short on space it is a good idea to erect a trellis or climbing frame before planting your seeds.

It is easy to grow cucumbers from seed indoors, but the trouble comes with transplanting.  If conditions aren’t ideal they sulk spectacularly.  Leaves fall off and they shrivel up. In the worst case they die!  The biggest factor responsible for this is temperature; ideally cucumbers need the soil to be 18°C or warmer.

Cucumbers are easily stressed so to have a great harvest it is best to pamper them and give them what they need.  Which is plenty of space.  Sow the seeds 40cm apart in the row and make the row about a metre away from the next row. The seeds and seedlings may seem tiny but they grow to very large plants.

Zucchini is a prolifically fruit bearing plant that can turn from a tiny zucchini to a marrow in the blink of an eye.  So it’s hardly surprising that this is a a hungry plant that thrives in a soil rich in organic material and well-rotted manure.

Zucchini can be grown indoors but it doesn’t like being transplanted. Sowing directly into sunny garden soil once the soil has warmed up to at least 16°C will give you the best success. For extra warmth, zucchini also like to be grown on a bit of a hill. Create a mound 15-30 cm high and 30-60 cm wide.    Make a shallow dip in the top and plant 4-5 seeds about 2cm deep.  Once they grow their true leaves, thin to the two strongest plants.  If you want to grow more than this, space the mounds at least a metre apart. These plants grow huge! 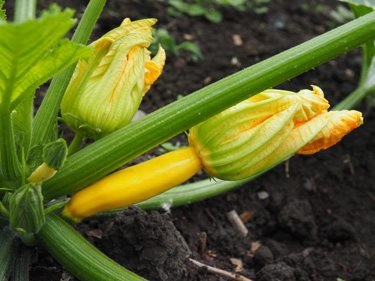 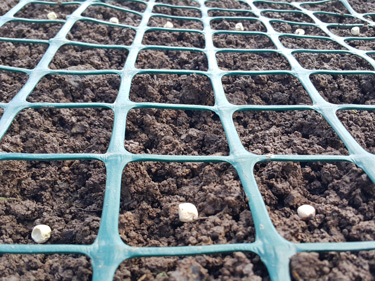 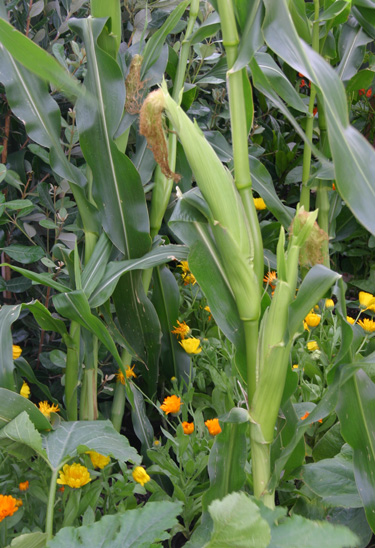 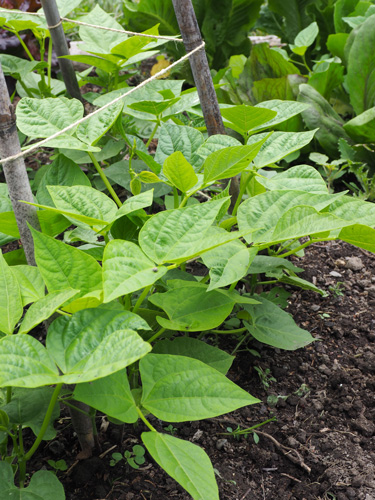