How does a full-time teacher and mother of four have time for gardening? For Diana Gallagher it’s all about meticulous planning. Diana agrees that time management is something that comes naturally to a seasoned school teacher. She’s also learned the importance of taking time out to unwind and refresh in order to cope with her relentlessly busy working week.

“Somewhere along the way I discovered that my happy place is in my garden,” says Diana.

In fact, it has become so much her happy place that she is has just resigned from teaching so she can spend more time outdoors - and devote her time to a new family business, Clevedon Strawberries.

“When I was teaching, the only time I had for gardening was on weekends. And with kids sports taking up most of Saturday, it was really only Sunday,” explains Diana. So she’s mastered the art of scheduling her Sundays so she can stay outdoors till dark, with minimal interruption. “I get up early while they’ll all still sleeping, get a week’s worth of baking done, make sure there is lunch stuff for them to find in the fridge and get the crockpot on for dinner. Then I make my escape!”

Her gardening has hit full stride since her children reached a more independent age. “I really only dabbled in it when they were little, but as the kids have got old enough to make their own sandwich and answer the phone, I’ve been able to spend a whole day out here.”

Diana’s devotion to her Sunday gardening has delivered a bountiful vegetable plot that means she rarely needs to buy vegetables. But it’s also led to at least one major disaster. Like the day she planted her seeds before a downpour. “It was dumb really - I knew heavy rain was coming, but I had my beds all ready for sowing and I was hell bent on getting my seeds in because I only had Sunday to do it or I’d have to wait another week. So I spent all afternoon out there planting my seeds in straight rows with string lines (I like order). Then the rain came and absolutely everything washed away!”

Diana’s vege garden is a series of raised beds, built by her husband, Kevin. Because they live on a hillside, the beds were built as level terraces, deeper on their downhill side. The north facing aspect means they catch the sun perfectly, while they also mean she can plant her vegetables in perfectly drained soil, above what is otherwise quite a heavy clay based soil. Each year she piles on another load of compost and well-rotted animal manure. It helps that they have cows and chickens on their two-acre property.

Kevin also loves to be busy outdoors on weekends, a welcome change from a hectic working week in the city. As well as the vege beds, which Diana says are “perfectly level and square”, he has built a garden shed and climbing frames. “Every keen gardener needs a Kevin,” laughs Diana. “I couldn’t have gardened so easily without his help.” He enjoys building so much that she’s inclined to find herself with a new planter box or climbing frame to plant, without even having to place her order.

During the spring, Diana takes over the workbench in the garage. The north facing windows above it provide ideal warmth and light for her seeds. Lined up in rows – pity help anyone who knocks them – are dozens of trays of sprouting lettuce seedlings. Also capsicums, tomatoes, cucumbers, and zucchini, in readiness for planting out into lovingly prepared beds in early November.  “I always end up growing too much because I can’t help sowing the whole packet each time,” she says. But part of the pleasure Diana gets from her hobby is having seedlings (and harvested veges) to give away to friends and work mates.

Nothing goes to waste. “If I get a glut I can’t throw anything away. I think that’s inherited - Mum’s a squirrel too!” Diana enjoys the flavours of her summer garden even in the middle of winter when there are herb pestos and beans in the freezer. Plaited onions and garlic hang in the shed. After her first accidentally huge crop of garlic and shallots, she taught herself how to make the decorative braids. Jams and chutneys adorn the top shelf of the kitchen pantry and Diana is particularly proud of her supply of frozen chillies, still bright red and green, from autumn’s bumper harvest.

But her greatest pride of all is serving up veges picked fresh from the garden. “I wash the veges and leave them on the bench for everyone to see. I make them come and admire what I’ve picked! And I still get a thrill of saying all the veges on this plate are from the garden. It still amazes me!” She says the kids often catch her crouching out in the garden just looking at her plants – watching them grow.

People say she has green fingers and Diana thinks she probably did inherit a few gardening genes. Her mother is a very accomplished gardener who, strangely enough, was also a school teacher with four children.  As a teenager Diana earned her pocket money picking and packing apricots in her parents’ Hawke’s Bay orchard. She’s hopeful her own kids will be as willing to help when its time to pick the strawberries this coming summer.

It’s eleven years since Diana and Kevin moved to their sunny rural slope overlooking the Clevedon Valley. As well as tending her expanding vege garden, she’s planted hundreds of trees, shrubs and flowers. Being orderly by nature, she’s partial to clipped border hedges, and has made good use of box honeysuckle (Lonicera nitida) and silver germander (Teucrium fruticans), which she loves for its soft colour and rapid growth, “Although we do have to clip it a lot” she says, “two or three times a year”.

Diana has a preference for old-fashioned flowers. Hydrangeas are among her most loved. A huge old bush with vivid blue flowers had to be moved when they put in a new driveway, so she dug it up and used the axe to break it into sections with roots. Not sure if they would grow, she healed them into the soil while she decided where to plant them, and many years later they’re still in the same place - a magnificent flowering hedge. She has also planted lots of camellias, and a wide range of different magnolias and michelias, which she loves for their fragrance. Spring bulbs are another passion and she’s learned to be patient; “Over time they bulk up if the soil is right.” Proof of this is a patch of bright blue Dutch irises that surprised her this spring. “I’d forgotten they were there, and they grew up all around a pot I’d plonked right on top of them!”

Most recently Diana has caught the rose bug and this winter planted her first dedicated rose garden. “I had no idea which varieties I should plant, but I will learn by doing, just like everything else in this garden”, she muses.  “In the beginning I planted willy-nilly, but I’ve learned now to look after the soil and that things grow and need pruning!” She has learned a lot from her neighbour Denise, a very experienced gardener who has also donated many plants, such as the white flag irises that are filling the space under an avenue of evergreen magnolias along the driveway.

Diana said goodbye to teaching at the end of term three and she’s excited at the prospect of being able to garden not only on Sundays. But her time management skills are going to be as necessary as ever now that she has a field of 80,000 strawberry plants to look after. This summer will be their first harvest. After growing a successful trial bed of 100 plants last year, Diana and Kevin in partnership with their neighbours have taken the bull by the horns. And just as they did with the garden, they’re learning as they go.

Have a good hose system. I’ve spent far too many hours dragging a hose around. Now I have taps close to the vege beds and easy to wind hose reels in two strategic places. They’re nailed to posts so nobody can wheel them away!

Keep tools handy. Now that we have our little garden shed close to the vege beds I save lots of time walking backwards and forwards and every tool has its place.

Wear pockets or a builder’s apron big enough to carry plant ties and seed packets. I also use a trug for hand tools.

Cover the soil. I like to cover the soil over winter so that I don’t have a hug pile of weeds to battle in spring. I lay old carpets, cardboard and sacks over the beds I leave bare over winter, so when I lift them in spring and the soil is weed free, friable and ready to go without heavy digging.

Build soil in situ. You can make compost right where you want to use it. I often mulch between rows with newspaper and straw and then dig it in at the end of the season. I’m also learning about cover crops and planning to start a Bokashi composting system so I can dig the kitchen waste directly into my garden beds. The less wheel-barrowing the better!

Plan ahead, but not too much! Planning and making lists of what you want to plant when, saves time and mistakes, but don’t plan too much or you won’t do it! 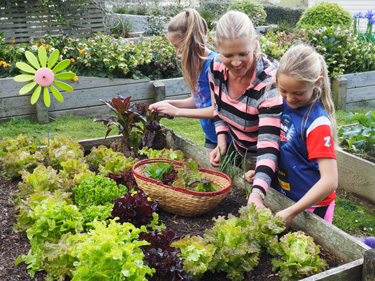 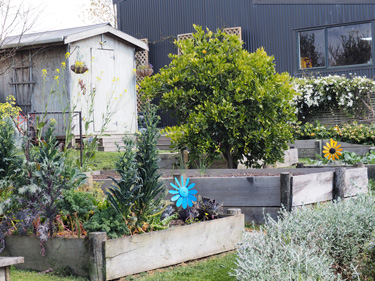 Diana's garden is a series of raised beds. 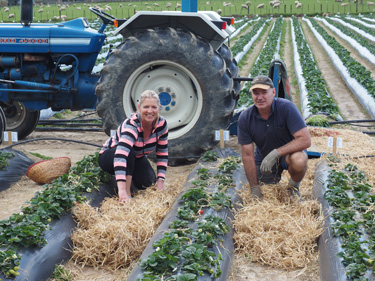 Diana and Kevin prepare for their first strawberry harvest 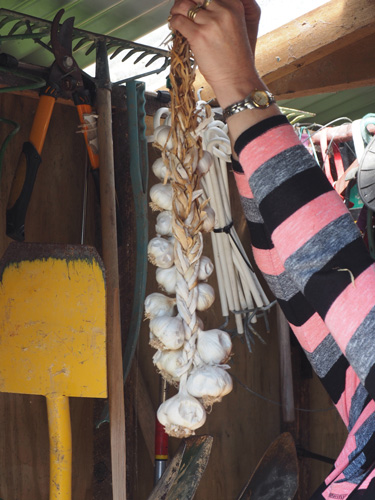 Garlic braids hang in the shed