For Liz Clark, gardening is both a passion and her therapy. She’s moved house many times, and wherever she goes, she gardens.

A child of the sixties

Liz grew up in a Mt Eden villa in the days when central city living was affordable for the average kiwi family and it was common to get by on a single income. Money was tight but they were healthy. Liz and her sisters played a lot of sport and ate well from a large vegetable garden.

In those days the backyard was often Dad’s domain on weekends, but in the Clark family, Mum was the gardener. Liz has vivid memories of her mothers’ garden. “it was a typical sixties garden, very random with lots of flowers. Most of all, Mum was a mad keen vege gardener with huge compost heaps. Gardening was very difficult on those volcanic soils with lots of huge rocks, but she was always out in it.  We all recognised Mum’s bottom. Now people say that to me!”

A garden was an everyday part of life for as long as she can remember, but Liz clearly remembers when she first ‘fell in love with nature’. Holidays were rare in those days so, beyond the bounds of the quarter acre section, her experience of nature was limited. That was until she became a Girl Guide. “I absolutely loved the Girl Guides. A camping trip to Waiheke Island was a life changing experience. “There were so many magical firsts for me it became a dream to live on an island.” It was through Girl Guides that she developed a love of native plants.

Gardening on an island

Liz’s knowledge of native plants came in handy when she and her husband Ron built their dream home on Waiheke Island. The council wanted a garden plan featuring native plantings. Putting a garden plan on paper for the first time led her on another adventure. “I decided I enjoyed it so much that I took myself off to Unitech to learn more about garden design.” While at Unitech she became close friends with an experienced landscape designer and together they spent many happy years designing and maintaining gardens for others.

As a consequence of her new design focus, Liz says her Waiheke garden was very disciplined.“It had a shape and that shape had to be maintained. I grew plants I didn’t really love in order to get the shapes I wanted.” Her planting choices were also defined by coastal conditions; salt laden winds and dry clay soil, and the fact that every plant had to be carried over on the ferry. “Planning was critical, say’s Liz. “You don’t indulge as much in impulse purchasing when you can’t just load the car up every time you come across something interesting!” The plant collector in her may have been frustrated but “it was really good for me to learn that discipline.”

Liz and Ron moved back to the mainland eight years ago to be closer to family. It wasn’t easy for Liz to leave the garden she had poured so much creative energy into. “Our Waiheke home was the dream and we were involved from the ground up. To me a home is a home and I always prepare it forever”.

But, not one to sit around moping, Liz wasted no time getting stuck into her new canvas, a clay slope around a sixties house on Auckland’s north shore. This garden is significantly smaller then her Waiheke paradise, but the biggest challenge she faces is the lack of privacy in an increasingly built up suburb. On the upside, she had become used to gardening on clay so the well drained, deep clay loam is a gift. And being closer to garden centres makes it easier to indulge her passion for plants.

Liz’s current garden is a great example of a plant lovers garden tamed by a designer’s eye. “One of the things that I learned, and to me it really works, is you can have a lot of what you want if you have a basic structure.” She avoids mishmash by developing themes and the use of repetition. “I love globes. I repeat them throughout the garden. They may not be shaped from the same plants but they are giving that link throughout the garden.”

Lately there have been some major changes. The neighbour’s house has been expanded both upwards and outwards. A large tree has been removed and so has a worn out ponga fence that used to divide her garden in two, providing her with a ‘secret garden’ where she could potter in complete privacy. But Liz looks at the positives, regarding such changes as new design challenges with the prospect for more planting. She says, “That’s what gardening is like, constantly changing and never finished!”

A recently planted Michelia ‘Bubbles’ hedge is growing quickly to provide a screen along one boundary. Three young Albizzia trees are already starting to create a sense of privacy. In spring their horizontal branches covered with fizzy pink flowers create are a picture when viewed from both decks; Liz and Ron’s, as well as their neighbour’s. To replace the old ponga fence Ron is building a metre tall screen. A pergola covered walkway running along the retaining wall below it will add to the screening effect, especially once it’s filled with climbing plants.

The ‘top garden’ at street level is designed for easy maintenance, which leaves Liz to spend her time in the more private areas of her garden. Here she is experimenting with mass planted ground covers and some  classic ‘mid century’ shrubs such as Coleonema ‘Sunset Gold’.

A nod to the past

In reference to their sixties-built house, Liz likes to include retro plants in her garden. There are some conifers (which she never used to like) and the colourful flowers her mother would have planted. But foliage is the priority for Liz, “I can’t live without edging and I love texture.” On a flat terraced area nearest the house is a thriving vege garden. Like the rest of the garden it is a picture of health and vitality.

It’s important to Liz that her plants grow fast and vigorously. “If I don’t get them growing fast I might not get to see the finished result!” She laughs. “To me, the biggest thing you can do to get plants growing is to keep the soil healthy.” Like her mother before her, Liz is a great believer in compost and uses lots of it. “Compost is the be all and end all. I could not live without it.” She buys compost in bags and always keeps up to six bags in the shed ready to use. “It’s too hard for us to get stuff in bulk.”

In spring and autumn she feeds the whole garden using a range of different fertilisers, including lots of sheep pellets. “My latest craze for the top garden is ‘Mulch and Feed’.  We also have a worm farm. Ron uses the worm wee on the vege garden. The chickens recycle the kitchen scraps. “I am no expert but I love recycling. We choose not to have garbage disposal system in the kitchen.”

Liz says she’s a bit of a maniac in summer with watering. “To me part of the love and the nurturing of a garden is watering it. Our water bill escalates in the summer but this is my hobby - I’d rather spend money on my garden than clothes and parties." They collect rain water but she has no desire for an automatic watering system as this only encourages over watering which she wants to avoid. “You can see whats happening when you hand water. You’re managing it.”

How to stay sane

Liz says she couldn’t live without an outdoors. “We lived in an apartment for a while and I was like a caged animal! There was a community garden of sorts that nobody had tended, and I ended up spending all my free time with the drug addicts and derelicts. It wasn’t mine, but my gosh would I get cross if I saw someone doing anything destructive in that garden!”

She’d like to stay put in this garden until she can’t cope any more but, “If we ever go into a retirement village I would have to be on the ground level with a garden. Otherwise I'dI go mad!”

Liz is modest about her gardening prowess. “People say to me you’ve got a lovely garden and I think to myself, ‘you could too’. I don’t have any special skill or gift but I spend hours in it. Days in it!” Her advice to a beginner gardener is to “just do it!”.

"And it’s okay to make mistakes,” she adds. For example, “You buy something beautiful, take it home and do what the label says and in a year it dies. Too many people get discouraged. When this happens I just say you’re not for me. I’ll find another place for you to grow and if you still don’t grow you’re out of here!”

And if it does grow well, she might plant more of the same. “And then of course I might have to change my whole look to cater for it,” she laughs. “It’s like some people have shoe obsessions. I’m quite happy in my gumboots!” 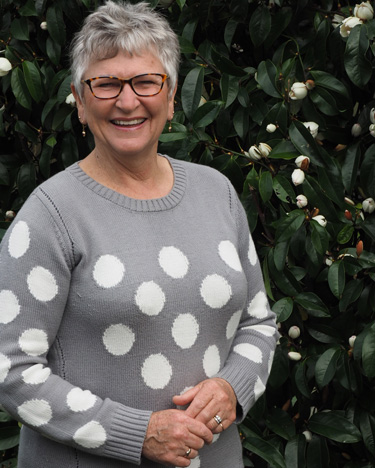 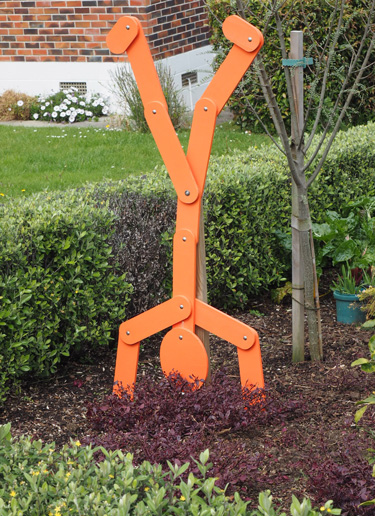 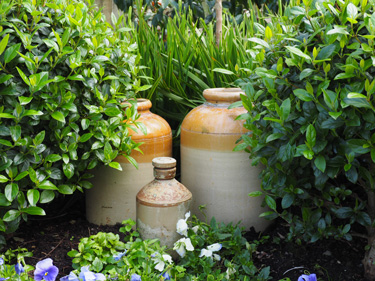 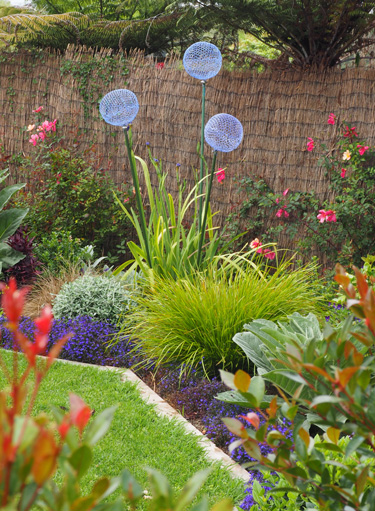 Globes of chicken wire add interest to a colourful border 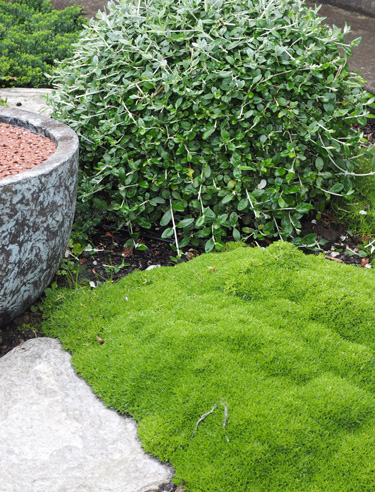 Scleranthus forms a mat in front of a clipped Teucrium ball