Pride of the Patch

It’s planting time for those warm-weather vegetables that will feed the family for six months or more.

With three or four months of summer stretched out in front of us, it’s time to plant vegetables that will capture the sun’s energy inside their sweet nutritious fruits. There is something very satisfying about the autumn pumpkin harvest, especially if you have space to grow enough to store away for winter dinners.

Pumpkins and squash belong to the plant family ‘cucurbitaceae’ along with zucchini, cucumbers and melons.  Collectively they’re called ‘cucurbits’ and they share some key features. Most importantly, they’re all heat loving summer crops. Although some have been bred to be more bush-like, cucurbits are essentially vines, and most need space to ramble. If you don’t have much ground space you can give them a study support to clamber over on. A third and interesting feature of a cucurbit plant is that it is monoecious; having separate male and female flowers on the same plant.

Growth rates vary. Zucchini and cucumbers produce fruit quickly and continuously. For pumpkins, squash and melons the wait is a little longer. They need a good three to four months of warm weather to reach maturity, hence the need to plant as soon as the soil has warmed (to 16℃). Frost cloth is useful to have on hand in case a freak cold snap occurs after planting. A greenhouse provides a useful way to get plants started earlier in pots, but luckily garden centres sell advanced sized seedlings in individual pots at this time of year.

Garden centre seedlings are commonly F1 hybrids, bred for success with strong disease resistant growth and high yields of high quality fruits. Such hybrid vigour offers a real advantage, especially if space is limited. But if you want a repeat performance, you will need to purchase that same hybrid variety next time, because its seed (or the self sown plant that pops up in your compost heap) will not reproduce true to type. Vegetable varieties that will come true to type are known as ‘open-pollinated’ varieties. Growing open-pollinated varieties (which include ‘heritage’ varieties) helps conserve the genetic biodiversity in our garden vegetables.

Cucurbits are pollinated by bees and some other insects. When foraging for food, bees transfer pollen from the stamens of the male flowers to the sigmas of the female flowers. Pollination can only happen during the middle part of the day when the bees are active and when both male and female flowers are open. The male flowers form first and then the females, further down on the vine, sometimes a week or two later. The female flowers are the ones with a tiny immature fruit below the petals. Each female flower is open for one day only and it takes a lot more than one bee visit to do the job. Flowers that are not sufficiently pollinated will drop from the vine. Oddly shaped or stunted fruit (or no fruit at all) also indicate that pollination is lacking.

Poor pollination can signal a lack of bees. It may also be weather related. When its humid, pollen grains get sticky and don’t transfer well from bee to stigma. Overly hot humid weather may also delay flowering. On the other hand, bees won’t fly when its too cold or cloudy. For these kinds of reasons, some gardeners make sure of pollination by picking off the male flowers and dusting them onto the female flowers. We can also attract more bees to our garden by planting the flowers they love.

Plant seedlings or directly sow seeds as soon as the soil has warmed and the risk of frost is over. Choose an open sunny sheltered position with well drained soil. Avoid soil that has had cucurbits growing in it the year before. Crop rotation reduces the chance that your cucurbits will be hampered by soil borne pest and disease problems. Planting pumpkins where you grew brassicas (especially mustard) the previous year is helpful if you have had a problem with nematodes (eelworm).

Before planting, mix in compost plus balanced fertiliser or manure. Take care not to disturb the young roots when planting seedlings. Alternatively, sow seeds directly into warm soil. To improve warmth and drainage, create small mounds of soil and sow two or three seeds per mound. Mulching with pea straw conserves moisture and protects fruit from being spoiled. It also keeps the soil moist and blocks weeds, especially if you lay your straw over a thick layer of newspaper.

Regular watering and feeding promotes vigorous growth and heavy fruiting. Cucurbits grow best with a fertiliser that contains plenty of potassium. Too much nitrogen will reduce fruiting.

Towards late summer, about a month before you expect the first frost, cut off the growing tip of your pumpkin vines to channel the plants energy into sweetening and ripening the existing fruit rather than producing more fruit that won’t have time to ripen. To assist ripening, trim off leaves that are shading your pumpkins.

Test pumpkins for ripeness by gently knocking with your knuckles. Ripe pumpkins sound hollow and have very hard skin resistant to denting. Another good indicator of ripeness is when vines begin to die off.  Cut with secateurs, leaving 10cm stem to prevent disease entry and storage rot. Wash and leave them to dry out for about two weeks in an open sunny position before storing in single rows in a cool, airy but dark place for up to six months. Check regularly for signs of rot.

Cucurbits grown not so much for food but for their good looks and usefulness are called gourds. Like pumpkins and squash, they grow on a vine over summer to produce an autumn crop of fruit. There are two main types of gourds grown in gardens. The Cucurbita pepo var. ovifera group are the most closely related to pumpkins, producing a range of curiously shaped and highly colourful hard skinned fruits that will last as colourful indoor decoration for many months. They can then be composted and their seed used for a crop the following year. The fun is in the variety of plants and fruits produced.

The second type are ‘bottle gourds’, belonging to the species Lagenaria siceraria. These hard shelled gourds can be dried and cured over winter to be crafted into objects that will last indefinitely. For thousands of years they’ve been used as bottles, bowls, musical instruments, tools and artworks, decorated by scraping, cutting or burning images onto them. Fun to grow and paint, gourds are made into all manner of crafty objects including lamp shades, bird feeders and plant hangers, as a quick visit to pinterest.com will reveal.

Gourds are grown in the same way as pumpkins and can be sown in pots or straight into the soil in early summer. Ideally, place several seeds in a mound or a mounded row and then remove the weakest growing plants. They will sprawl across the ground, but will also grow up a fence which helps keep them clean and dry. Harvest gourds as late as possible in autumn, but before frost. 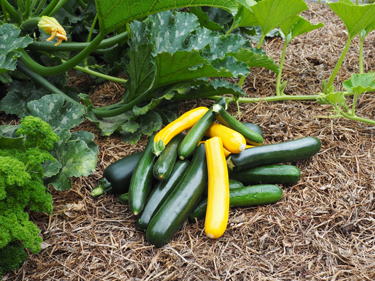 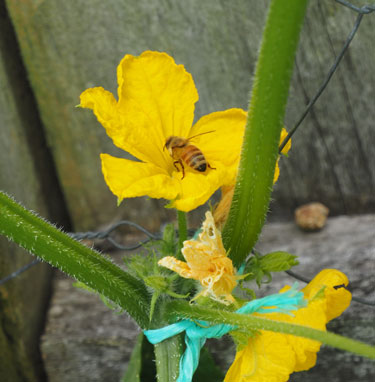 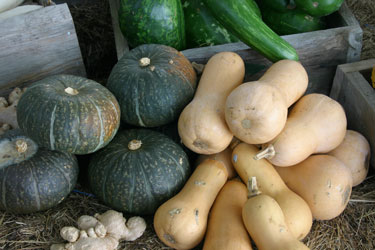 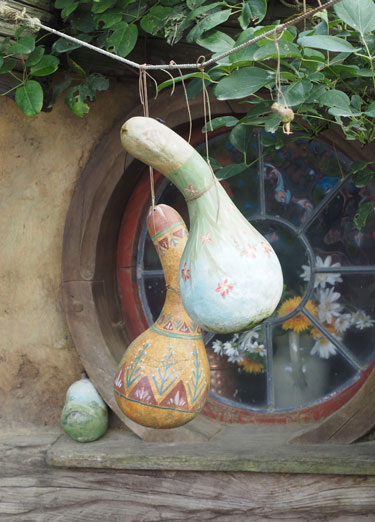