Easy care lavenders are among life’s simplest pleasures. Queen Elizabeth the First was a lavender junkie. She demanded a year round supply for fragrance and for her lavender tea, which she drank in copious quantities to soothe migraine headaches. Luckily for them, her gardeners knew the art of preserving lavender for year round use, but they’d have given their eye teeth for all the different lavender varieties we have available to us today.

When it comes to choosing a small shrub or flowering hedge for your garden, lavenders have stood the test of time as some of the most accommodating shrubs of all. Fragrant, colourful lavenders suit any size or style of garden, and are so quick growing, easy and versatile, that they never go out of fashion.
Excellent as hedges or mass planted, they also grow well in containers and mix beautifully with other sun loving Mediterranean herbs such as rosemary, sage, oregano, and thyme.

Use lavenders to create low borders for herb and rose gardens, along fence lines, paths or driveways. For an informal tapestry effect (ideal on a sloping site), cluster different lavender cultivars in varying shades of purple, blue, white or pink.

Summer flowering Lavandula angustifolia, native to high altitude Mediterranean regions, is the most sought after for perfumes and medicines. The precious oil is contained in vivid blue –purple flowers. Spike Lavender (Lavandula latifolia), which grows at lower altitudes, has broader foliage and paler flowers, but a particularly high oil content. Lavandin (Lavandula x intermedia) is a hybrid of the two, and a leader in the perfumery industry due to its high yields. Many excellent garden cultivars, such as ‘Grosso’, belong to the lavandin group. A long history of use in English gardens is responsible for these Mediterranean natives being known as the ‘English lavenders’. They are cold hardy and compact with flowers held on long stems, perfect for picking and drying. A favourite for little hedges is Lavandula angustifolia ‘Hidcote’. Considered to be the hardiest of the English lavenders, it grows 30-40cm tall and wide with silver leaves and rich violet-blue flowers.

The earliest and longest flowering lavenders belong to the Lavandula stoechas group of cultivars, variously known as winged lavender, topped lavender, Spanish lavender, French lavender, butterfly lavender, crowned lavender and rabbit ears. They commence flowering from mid winter through spring, some of them flowering for most of the year. Though not as frost hardy as the English lavenders, they are ideal for our warmer coastal climates. Wild Lavandula stoechas inhabits the rocky coastlines of Europe, particularly France. It was once used to dress war wounds and has a long history as a perfume for baths, because of its strong camphor-like fragrance. Try doing as the Romans did and add the flowers to your bath water.

Exciting new stoechas lavenders are the ‘Ruffles’ lavenders from Australia and the NZ bred ‘Leigh’ series, as featured on page 4. The Ruffles collection, ‘Boysenberry Ruffles’, ‘Blueberry Ruffles’ and ‘Raspberry Ruffles’ are early and repeat flowering, with compact growth to 60cm tall by 80cm wide.  Chunky bracts are distinctively ruffled along their margins. Flowers sit just above the foliage offering extra tolerance to humid conditions. Lavender ‘With Love’ is another outstanding new variety, early flowering with bright pink flowers and superior disease resistance.
Other top performing cultivars include bold flowered ‘Major’, NZ raised ‘Marshwood’,  and early flowering ‘Avonview’. Popular ‘Pukehou’ is another excellent NZ variety - big and bushy (up to 70cm tall) with showy bright purple flowers for many months in spring and summer. A trim after the main flush will stimulate a second flush from late summer.

With so many different varieties available how you pick one for a hedge or mass planting? Firstly, select a type that grows well in your soil and climate. Then consider the growth habit you prefer. Lavenders vary in height, and although you can control height to a degree with trimming, it’s best to choose a variety with a natural tendency to the height you desire. Colour also varies widely, so it’s helpful to make your choice while plants are in flower.
Purchase young healthy plants, with bushy growth right to the base. With a string line as guide, space plants 30 to 40cm apart for stoechas varieties. Smaller growing summer lavenders (L. angustifolia types) are best planted 15 – 20cm apart.
Water after planting and keep the soil moist while plants establish. Trim regularly to encourage neat bushy sideways growth and you’ll have an established looking hedge in the space of a season.

Lavender needs pruning at least once a year to encourage new growth and flowers, and avoid that leggy look. As a rule, pruning is carried out immediately after flowering. The promiscuous flowering stoechas lavenders can be pruned after the first flush, which usually means cutting off a few flowers. Keep trimming after each flower flush - light and often is ideal. Otherwise, plan a twice-yearly haircut, in spring and again in late summer (flowers or not) to keep your stoechas hedge in shape.
Avoid cutting into bare wood. 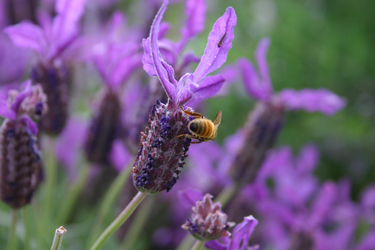 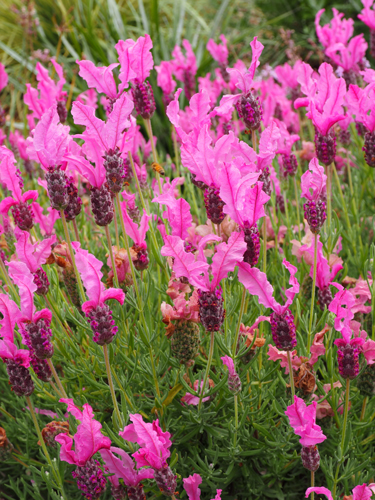 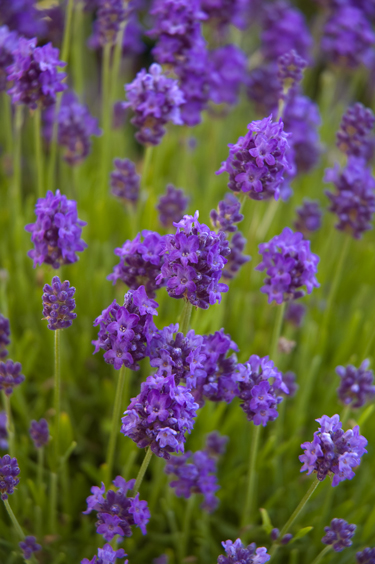 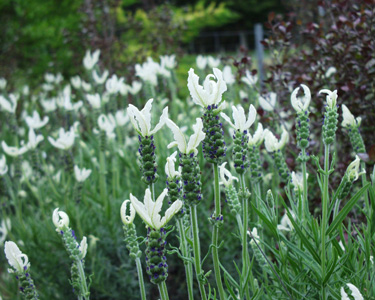