Debbie and Basil Borlase didn’t set out to make a garden that would appeal to children, it just happened that way. When they made the move from Auckland the creative couple were looking for a blank canvas to make their dream garden. They found it on a sheltered terrace of land above Kinloch on Lake Taupō’s northern edge.

Eight years later, Debbie’s beautifully maintained plantings are the outdoor gallery for an eclectic collection of art, much of it made by Basil. As the garden expands, so does the gallery. “Each time I put in a new bit of garden, either I’ve found something or Baz has made something, so we’ll put a bit of art in too.”

Much of the art work is derived from up-cycled ‘finds’ from the second hand shop at the local transfer station, which Debbie affectionately refers to as ‘The Tip’. Colourful ceramics and other household objects are given a second life as garden art, often via Basil’s workshop. Cups and saucers have been made into bird feeders. Wind chimes made from real silver cutlery tinkle in the breeze and pottery trinkets dangle from trees. Debbie's ‘teapot wall’ makes me think of Alice in Wonderland.

“I want my garden to be fun” says Debbie. Visitors have a chuckle at her beds of roses; red Flower Carpet roses planted in old iron bed frames. One of the garden rooms features a dinghy with seagulls. Throughout the garden, mirrors add extra sparkle and an illusion of depth to garden beds. The soothing sound and sight of water is another enchanting feature of Debbie and Basil’s garden.

Visitors of all ages receive a warm welcome. “The loveliest visitors are the kids,” says Debbie. “I love watching their reactions as they move around the garden.” Every autumn Debbie and Basil host an Easter egg hunt for local children. Debbie loves that it gives the mums a day out too. “This year we had a young mother with a new baby. She’d been so lonely and she really enjoyed her day. Helping people in that way is a wonderful feeling.”

There are also animals for the children to enjoy. Debbie’s ‘gang’ in the paddock includes Monty the kunekune pig, three pet sheep, a goat and a young Belted Galloway cow. Jackson the Bichon Frise helps out on Easter egg hunt day. There are chickens too, and the garden is filled with as many wild birds as Debbie can attract with her planting. “Predominantly I plant for wild life. Anything that brings anything in,” she says. Tui and bellbirds flock to her banksias, grevilleas, flaxes and her Australian waratah tree, which flowered for the first time this year. Blue flowering Echium is a magnet for butterflies. For the bees Debbie plants a wide range of flowers.

In the orchard beyond the chook house there is plenty to keep these pollinators busy, including plums, apples, nashi pears, peaches, apricots and feijoas. Lemons are grown under cover in a tunnel house beside the vege garden. There are grapes draped over walls and a very productive thornless blackberry variety.

Debbie and Basil’s creative endeavours began in their previous garden in Cockle Bay, Auckland. “I’d joined the Pakuranga garden club. There was an amazing bunch of women who inspired me to start a garden. Then people started coming to visit and they were loving what we’d done. And we loved doing it!”

On the warm, sheltered side of their Taupo house, Debbie’s ‘Auckland garden’ is a small garden room that features plants she brought with her from Cockle Bay. Here Debbie has planted her clivias, hellebores, potted bromeliads and an arum lily, which came from the garden where she was born. The focal point of the Auckland garden is a small pond with a teapot fountain. Fairy lights sparkle at night and the perfume of star jasmine and daphne wafts through the bathroom window above.

But after Auckland’s abundance of tropical plants, Debbie was ready for a change of style. She wanted more space and hankered after the kind of garden that thrives in a colder winter. “I wanted fruit trees and bright autumn colours. Baz grew up in Nelson, and this is as close to a South Island climate as you’ll get in the North Island.”

Apart from the house and a stunning view of the lake, Debbie and Basil’s 12 acre canvas came with an orchard and some well established hedges. They were also grateful for a walnut tree, a young rimu, totara and some other well established evergreens planted by the previous owner.

Less appealing were the numerous timber-edged garden beds that had succumbed to a tangle of weeds. Debbie spent her first six months on her hands and knees clearing barrow loads of plastic weed mat and stones. “It was hard physical work but it was a cathartic time for me.” At the time she was also caring for her terminally ill mother.

Once she had cleared the beds, Debbie replenished her soil with organic matter, including used coffee grounds she sourced from the local cafe. In Taupō’s extremely porous
soil it can be difficult to keep the water and nutrients up but Debbie is discovering plants, like grevilleas and banksias, which thrive in the well- drained conditions. She has made good use of weed-smothering grevillea ground covers. “They grow like triffids, but I keep cutting them back. She’s trained some of them as small trees so that she can grow shade loving and frost sensitive plants beneath, such as the lush clump of Lachenalia which will send up their firecracker flowers in winter, and another favourite, leafy Ligularia ‘Britt Marie Crawford’. Planting grevilleas around the old camellias has been less successful. “The camellias need lots of fertiliser, but the gevilleas hate it. Someone’s got to go!”

Roses, still flowering in May, are chosen for their bright colours. Debbie is especially fond of red. Mass plantings of red Flower Carpet roses flank a large water feature at the entrance to the house. Elsewhere roses are blended throughout the garden. “I love putting roses in amongst the green. I like to have a splash of colour with everything.” She has also planted Flower Carpet roses to ramble among the tall flaxes planted by the previous owner.

“I don't particularly like flax but they’re there for the birds.” Debbie and Basil say sharing their garden is a way of ‘giving back’. Seeing others enjoy their garden encourages them to keep it up. And Debbie has another very important reason to garden. Living with chronic depression for many years, her coping strategy includes dietary control, lots of walking, making sure she has the right balance of quiet time and social interaction and gardening. “Gardening is huge. Huge!” she says.

She gardens systematically, treating her garden as a series of rooms. “I like the detail in a job and looking back on what I’ve done as I get from point A to point B.” Debbie’s three-step process is to trim, then weed then apply sheep pellets so she can see where she has been.
The mulch they put on last spring has really cut back on weeding and now that the garden is established, she is grateful that gardening has become more about trimming than weeding. “I love cutting back. It keeps the garden looking fresh and healthy, and it means more flowers for the bees.” 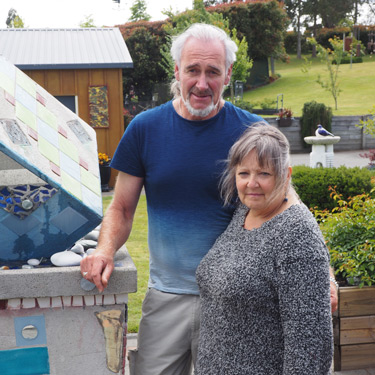 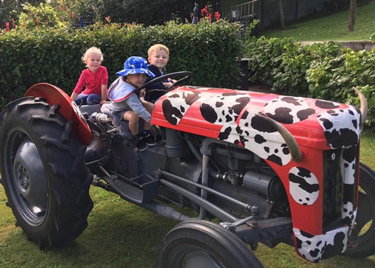 Basil's tractor is a magnet for small boys 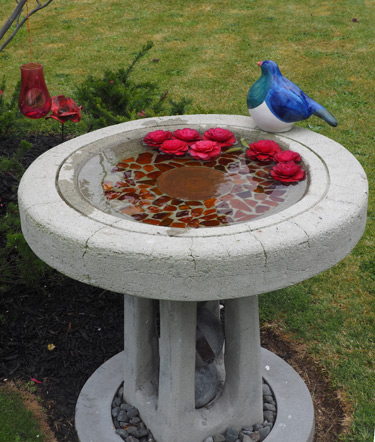 Camellias float in a bird bath 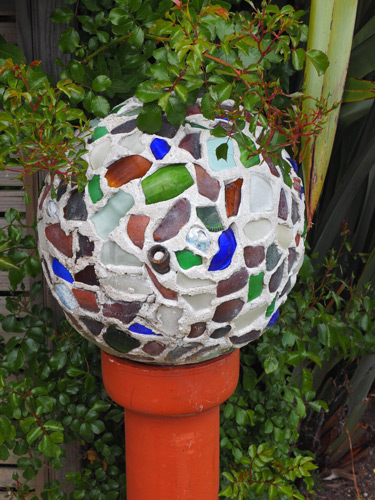 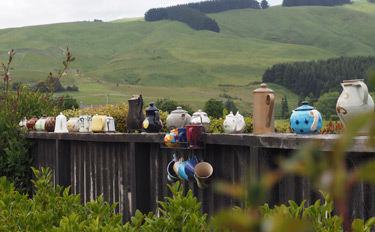