A life in plants

It’s fair to say Jules Moore has had a life-long love of gardening. At the age of eight she was potting up flowers picked from the roadside and by 10, had created her own nursery in a specially built lean-to on the family home’s veranda, propagating plants ready to sell.

Jules says she inherited her parents’ and grandmother’s love of gardening and knew from a very early age it would be her calling.

“My grandmother, Nana Joan, and my mum were keen floral artists and dad was a gardener and a bushman, often taking me on bush walks through the back blocks of our Taranaki sheep station. Mum had an amazing garden at home on the farm, often hosting people around her two acres of Azaleas, old fashioned varieties of Rhododendrons and gorgeous spring bulbs.

“In those days they used sawdust as mulch and one of my clearest memories is the macrocarpa sawdusty smell in the garden. On the days we’d have visitors, I’d set up my nursery under the trees and sell my plants.”

Unlike most 10 year olds, Jules would spend her hard earned income on more plants instead of ice cream or lollies, “reinvesting” at Barbara Jury’s nursery down the road.

“It was an absolute highlight going to Barbara’s nursery, which was full of amazing rare perennials and the magical Barnhaven primroses. I have always loved unusual and rare plants, trees and flowers. That nursery was my happy place.”

By 15, Jules was working every weekend in a local garden centre, and creating flower arrangements for local weddings, using her self-taught floristry skills. “I wanted to be a florist and landscape designer but couldn’t choose, so I did a horticulture apprenticeship with the Parks Department in New Plymouth. At the end of my study I was awarded Top NZ Apprentice and received the city’s Rosebowl Cup. For a woman in a male dominated industry, that was quite a feat. But I’m very driven, a trait I also inherited from Nana Joan.”

Over the next 35 years, Jules would go on to build an impressive landscaping career in all corners of New Zealand. “Having my own business combines my love of horticulture, gardening, landscape designing and building. There was never any question about what I would do!”.

Jules’ home in Riverhead, north-west of Auckland, is the base of her landscape design business, JM Landscaping, and is also home to House Botanical Ltd, a business that incorporates cut foliage, wedding floristry, antiques and plants. Although she and partner Marty only moved in three years ago, the property has undergone a major transformation.

“We have a view of the river and the house is surrounded by an acre of bush. I started landscaping it two years ago - by 2020 our plan is to host weddings alongside my design and nursery businesses.”

Jules’ garden has a formal, distinctly French feel. Large stone circular walls, crafted by a local stonemason and a vintage glasshouse with church windows, wooden floors and a chandelier create a beautiful setting for wedding ceremonies.

Away from this property she also has a large undercover nursery, with two staff. “It’s fantastic to be able to grow most of the hedging and subtropical plants ourselves, especially my favourites Dypsis baronii palm and Buxus ‘Green Gem’ balls.

Jules uses antiques to complement her planting scheme, which gives a French vintage feel to the garden. “There are bolds urns, wrought iron pieces and old galvanised troughs sitting amongst the pergolas with buxus spirals. We painted the house black and white and renovated it to fit with the theme of the garden, complete with French doors and unusual antiques. The circular motif is repeated throughout the garden, which makes it quite dramatic.”

Although the garden was originally intended to be planted in a palette of green and white, that changed once Jules discovered some new plants.

“There are lots of very large Buxus balls, Astilbe, white Zantedeschia ‘Elfin’ and rambling old fashioned roses, especially some beautiful pink David Austin ones. I found some Siberian irises called ‘Swans in Flight’, which are double white pencil irises. They sparked me up - I love anything a bit different or rare!”

Jules is becoming well known for her Zen inspired designs, an influence that she is incorporating into her upcoming New Zealand Flower and Garden Show display. She has had great success at the Show in previous years, winning two People’s Choice awards, multiple Gold awards and judges’ commendations.

“I’m going to create something special around the philosophy of Zen. The display will be different to my earlier Show gardens – this will be more holistic and evoke emotion when you come into the space. I am using Japanese plants in the garden, including a dramatic Japanese Maple as my feature tree and Pachysandra terminalis – a brilliant groundcover that gives a minimal look and feel.”

In her work as a landscape designer, Jules says while sub-tropical plants are always popular choices, she loves to “mix things up”.

“When I design I like to work with the senses and bring an element of surprise into a garden, in the form of scent or layering to create a three dimensional experience.

“At the moment I’m using a lot of irises, particularly ‘Kaboom’, ‘White Swan’ and ‘Caesar’s Brother’ and anything scented. The Galanthus, tiny white snowdrops are beautiful, as are Gardenias. I often use rare bulbs and bluebells – they remind me of my childhood and spring time. I’m always sniffing them! I believe every plant should have a purpose in the garden – for smell, for cutting or as foliage.”

Jules works with gardens of every size and utilises her building skills into the hard and soft landscaping; skills she acquired earlier in her career. She says the trend of house sections getting smaller has resulted in many people finding it difficult to create a balanced garden.

“It’s about balance and proportion and creating layers within the garden using plants, structures, sculpture or garden art,” she says. “By using clever design you don’t necessarily need to use large specimens around the boundary of your property to screen for privacy, but rather incorporate a structure like a pergola or raised planters closer to the house, making that your private oasis instead. The house and garden then become connected, balancing the landscape.”

Appropriate planting is also key for smaller spaces. “For example, use palms like Dypsis baronii that get to 4m high and layer smaller plants underneath to create a 3D effect. Queen palms that reach 10m high will dwarf the house – it always comes back to balance and proportion”. 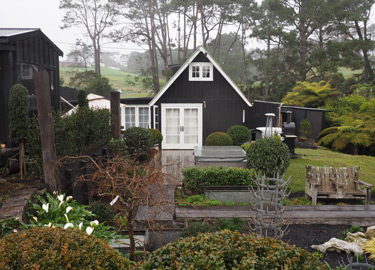 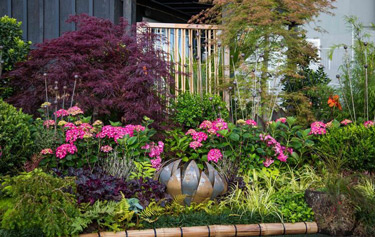 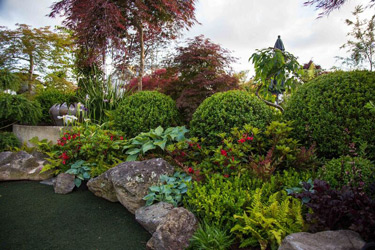 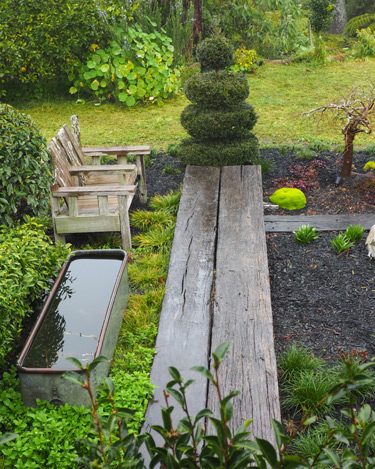 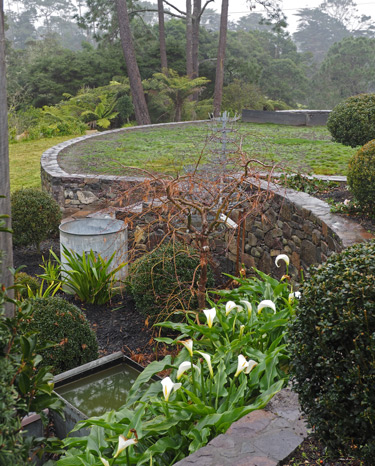