The power of two

Bronwyn and Neil Towersey’s favourite place to spend time together is at home in their garden. Their park-like refuge is the kind you’d imagine involves hired help. But, the Towersey’s garden is all their own work. It’s a labour of love they fit in around busy full time jobs.

Neil is a school principal. Bronwyn’s work in travel often takes her away from home for a few days at a time. “When I get home I literally drop my bag and head straight for the garden,” she declares.

They found their future garden by accident eight years ago while out walking, an expansive slope sweeping down from the house
to a natural watercourse below.

At 6000 square metres, it’s a very large property to find in suburbia. “The size of it was daunting at first” admits Bronwyn, “but we couldsee the potential.” Over half the area was undeveloped but through the wilderness they saw beautiful established trees and ponds.

It was a year of arduous work clearing the overgrowth before they could begin planting their dream garden. Now, instead of weeds, the vista from the top
level is of curvaceous green lawns and floriferous borders expertly woven around the trees. The trees (carefully chosen by Bronwyn and Neil to be the ones allowed to stay) were inherited. Practically everything else they have planted. Last spring their garden was a highlight of the Tauranga Garden and Art Festival. But a garden is never finished and for those who love gardening, that’s the point.

Asked who are the gardeners that most inspire her, Bronwyn reels off some famous English names, “Vita Sackville West, Capability Brown, Monty Don,” then adds someone closer to home, “My husband!”

Neil is as an exceptional maintenance person. The lawns are his department and, Bronwyn affirms “You can be sure the edges are done with precision! He takes pride in this and when they are done, it really is the icing on the cake with how the property looks.” They love working in the garden together but agree that the best time of the day is at the end, sharing a glass of wine and enjoying the fruits of their labours while listening to the birds.

Both Bronwyn and Neil grew up on farms with productive vegetable gardens and remember Christmas feasts with produce dug or picked from the garden that morning.

Neil recalls his grandfather’s muddy boots resting on the porch following
a good day’s toil in his Wairarapa vege patch where he grew the most spectacular tomatoes. Bronwyn’s grandparents had a vege garden well into their nineties. “My earliest memory of picking flowers came from my grandmother, who taught me to pick violets.”

Their garden is home to many plants that came from both sets of grandparents. There are treasures with names like Hydrangea Uncle Hec and Cylamen Nana. Bronwyn provides an example of the funny garden talk that arises from having so many relatives in a garden, “Today I gave Papa a good feed of sheep manure and I dug Grandma up, divided and replanted her.”

The gift of trees

Bronwyn and Neil are thankful to those who planted their trees. “We enjoy a noisy proliferation of native and exotic birds, most recently a kereru, which we are thrilled about,” says Bronwyn. “The dawn chorus kicks off at 4.30am in December with the tui always first up. Sometimes the moreporks are still awake so there is a cross over of calls.”

The Cercis Forest Pansies are favourite trees although they’re finding these are susceptible to wind damage. Their Awanui cherry trees, spectacular in spring, come a close second. Bronwyn points out the value of trees both as beautiful garden assets and as essential for a healthy environment. “At an aesthetic level, trees provide vertical structure as well as filtered light, shadows, movement and sound. At a functional level they’re vital air filters and oxygen producers.”

The deciduous trees are an integral part of the garden’s wellbeing. “Some people throw their hands up in horror at leaves in autumn” she says, “but
we embrace this because it provides a fantastic composting material to return to the soil.”

As the trees grow they create more shade, which then alters what will grow under them so the garden must continuously evolve. Bronwyn says the main drawback of large trees
is that they can draw a lot of moisture out of the soil, but there are solutions. “With mulching, allowing leaf decay and careful plant selection we can easily work around this,” she explains.

The changing climate presents some challenges too. “This last summer we had a drought and saw temperatures in the early 30s which has caused us to rethink some of our planting.” To this end she is increasingly turning to heat and drought tolerant plants such as Sedum, Phlomis, Achillea, Salvias and Iris. “You have to be sensible about water.”

“We don’t get the frosts we used to either, so we have aphids almost year round, and mildew and rusts seem to be starting earlier too. Again it’s choosing plants that are less susceptible, or can tolerate a few rogues!”

Bronwyn’s artistic plant combinations belie such constraint. A stroll along her shrub and perennial borders reveals the magic touch of an experienced plantswoman.

A botanist at heart

Bronwyn remembers her first gardening success. When she was seven her mother bought her a Peace rose to plant in the garden. “That first bloom seemed the size of a cabbage.
I thought it was the most beautiful thing I had ever seen!”

As a teenager she began a career in horticulture. Following her Massey diploma she worked with cut flowers and later as a nursery manager for Whakatane District Council where she become proficient in plant propagation “I adore the process of collecting seed, storing it, sowing, then nurturing it. The transformation of a bulb, tuber, seed or rhizome into flowers is extraordinary and rewarding.”

Filling such a large garden takes a lot of plants so it’s a good thing Bronwyn has a special knack with seeds. “When I plant flowers I need at least a tray of each thing.” She also enjoys a plethora of self-sown flowers to fill the gaps between shrubs and roses. Like the euphorbias which have interbred to give her some interesting variations on her original plantings. With a keen eye for something different, she’s glad for the luxury of space to plant garden centre finds and the unnamed treasures she grows from cuttings.

Old fashioned and English roses adorn obelisks painted deep claret red. Neil is responsible for these classic structures which provide valuable vertical accent all year round. A favourite rose is ‘General Gallieni’ which flaunts its peachy red tones well into winter.
Bronwyn relishes the changing seasons. “I love how the garden is bare in winter, then spring flounces in followed by a flowery summer.” 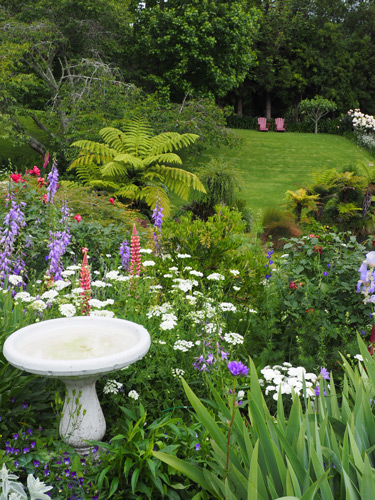 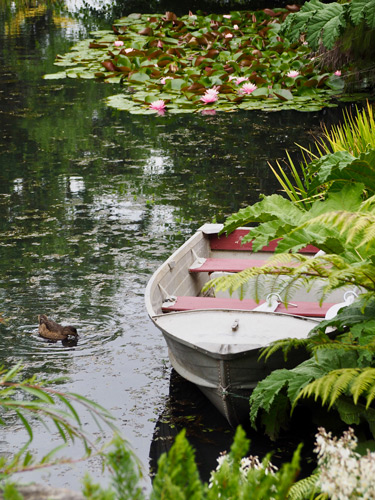 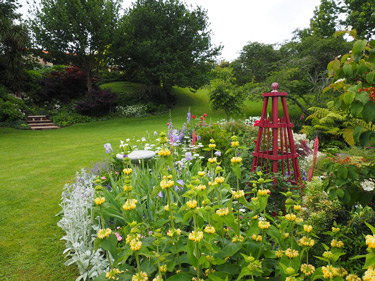 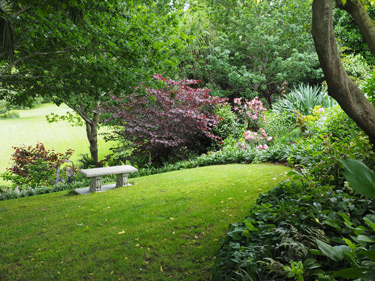 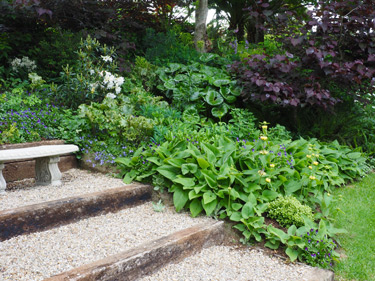 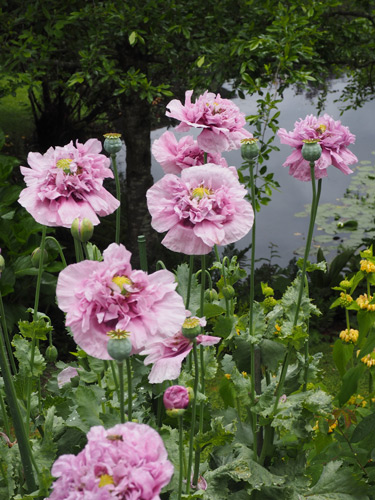