What do you do with a load of redundant water troughs? The answer came easily to Thames dairy farmer Robert Bax. It was high time for some changes in the family vegetable garden.

For well over ten years Robert’s partner Kathy Woolley had battled with heavy clay soil. Even worse, on soil that was once a farm paddock, was her unwinnable war on weeds. Raised beds were the obvious solution and the cow troughs would be just the right height for ageing backs.

The farm tractor was put to use rounding up the old cracked troughs from around the farm and positioning them to catch the sun on the old vege garden site. To open up the concrete bases for drainage, Robert says he spent a fair amount of time on the end of a crowbar. The broken concrete was left in situ, reducing the amount of compost needed to fill the beds.

Kathy says the raised beds are a joy to work with. Her favourite time of year is in spring when everything grows so quickly. She starts in August, plying the beds with extra compost and rotating her crops each year. By Christmas the garden is a picture of exuberant abundance. Kathy enjoys growing a wide range of veges, each year experimenting with something new. Tall tomatoes are about the only crop she won’t
grow in her raised beds, because they catch the wind and are not good with overhead irrigation. These she grows nearer the house where they enjoy good soil moisture over summer.

Kathy and Robert have been growing vegetables to feed the family ever since their three grown up children were tiny. Now the kids have left home they don’t really need to grow as many vegetables as they used to but “the raised beds have made such a huge difference that we enjoy it,” says Kathy. “Besides, there is something good about taking your bowl out there and gathering your food from your own garden just before you eat it - instead of having things going yucky in the fridge.”

These days she has a new generation of little helpers. Gardening is one of grandson Caleb’s favourite pastimes. “Sometimes he spends the day with me, planting and watering or harvesting things for lunch, and he loves coming to the garden centre and picking out plants.”

Improvements are ongoing in the Woolley-Bax vege patch. They have put up brush stick screens to provide shelter from the wind that whisks across the Hauraki Plains. The only drawback of the raised beds has turned out to be the need for extra watering over summer. So Robert designed and installed an irrigation system. Now the garden gets rained on despite any dry spells and Kathy says a timer is next, so they can more easily leave the garden to look after itself when they are away at their beach house. The wires strung overhead also support shade cloth which is pulled over to protect salad crops (and the gardeners) on hottest days.

Robert enjoys the challenge of setting up new systems for the garden. This year they’re trying strawberries in guttering, just for fun. The garden is now fully fenced, mainly as a barrier to marauding labradors, but the worst offender was the pet goat. “He figured out how to jump on top of the shed and then into the garden,” Kathy laughs.

To keep the garden free of weeds, the beds are never filled with soil from the farm and they don’t put weeds on the compost heap. Every spring the concrete beds are topped up with more compost, using what Kathy and Robert have produced in their own bins plus a few extra bags from the garden centre, which Kathy says is much easier than messing about with trailers and wheelbarrows. She feeds the garden with sheep manure, seaweed and compost. In the compost bins she combines the daily kitchen scraps with leaves that fall from their deciduous trees, a few lawn clippings plus a bit of lime.

Kathy enjoys growing plants from seed saying, “I usually end up with too many!” But the extras usually find a good home in daughter Gillian’s garden. Two-year-old Caleb and baby Lacey are already enjoying the benefits of their mother’s newfound interest in growing food.

Gillian says she’s lucky her willing and able father lives closeby. Robert is often called on to help with her garden projects. Her latest idea is a solid climbing frame to give her more space for pumpkins.

Gillian’s keen interest in gardening has taken Kathy by surprise. Like her parents before her, Kathy naturally encouraged her three young children to get involved in the garden, but says her eldest was a fierce resister. These days, mother and daughter enjoy discussing and planning their gardens together and often swap plants.

Kathy remembers gardening with her own mum, who at 84 still gardens. But she doesn’t remember ever ‘catching the gardening bug’ as such. “It was just part of life, just what we did.” She’s puzzled when city friends are amazed at what comes out of her garden, especially when they have space to grow their own. 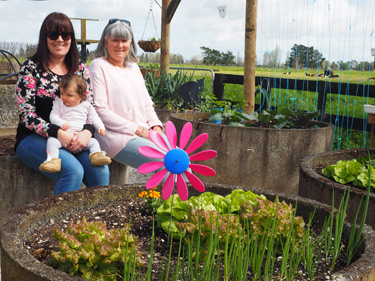 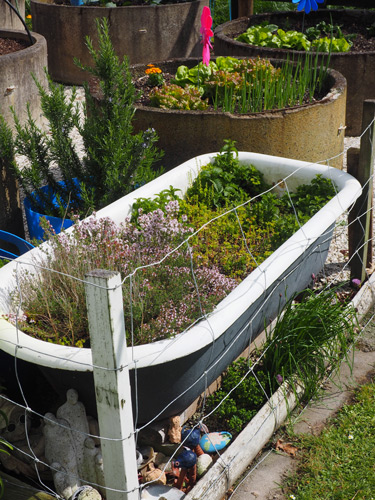 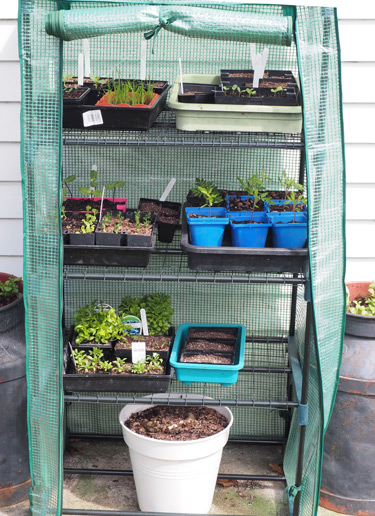 Kathy recycles pots to grow seedlings in a small shadehouse.