Untitled Document Sue Linn visits the Kapiti Coast for a peek behind the scenes of one of the Ellerslie International Flower Show’s most popular gardens.

When Raumati South School decided to stage an exhibition garden at the 2013 Ellerslie International Flower Show, it didn’t faze them that they would be the first school to be judged alongside the country’s top designers in the prestigious ‘Outdoor Gardens’ category.

Sure enough, the standard of excellence at this year’s Ellerslie was as we are becoming accustomed to - world class. And on the day they announced the awards it was impossible to miss the excitement that buzzed around the colourful garden with the bright blue wall. Raumati South School had won Silver. A few days later it was announced that they had also won the esteemed Yates People’s Choice Award.

Fourteen children aged between six and eleven, made the trip to Christchurch with their parents and teachers, taking turns to chat to show visitors and media about their garden. Teacher aide, Diane Turner said a key goal was “to encourage people to grow edible produce at home and provide habitats for wildlife in their own garden, and also to support gardens in schools in their own communities.”

After the Ellerslie Flower Show, the garden was gifted to Wharenui Primary School in Riccarton. Like Raumati South School, the Christchurch school is an active participant in the New Zealand Enviroschools programme. “We hope that their students will enjoy gardening with their new garden and also enjoy eating the produce, and as a result will want to try and grow more, not only at their own school but at home.’’

Back home in the real life garden at Raumati South School the buzz goes on, bolstered by another recent win at the annual Kapiti Coast Sustainable Home and Garden Show. The school garden is bursting with life when I visit in late March, despite the fact that it is now ‘between seasons’. Nestled at the base of a slope on the eastern school boundary, where there is ample sunshine as well as shelter from the nearby ocean and northeast winds, this is clearly a well-loved garden.

An enchanting but practical arrangement of paths and raised beds brims with veges, fruit and colourful companion plants. There are snow peas, corncobs, tomatoes, zucchini, beans, herbs and loads of leafy greens, plus a huge bed of thriving strawberry plants. Examples of children’s construction, engineering and science projects abound, with a clear emphasis on composting and water conservation. Colourful artwork adds to the cheerful scene and drift wood embellishments throughout are a charming reminder that we’re close to the sea.

Diane Turner and Raumati South teacher Michael Stewart, both passionate devotees of gardening in education, were co-directors of the Ellerslie project. The two also coordinate the learning activities in the garden at school, strongly supported by enthusiastic parents and staff, including a fully committed principal. Diane stresses that such projects cannot succeed without the full backing of these key players. As she sees it, the greater the involvement from all parties, the greater the learning opportunities.

Diane is also contracted by the local district council to help other schools and preschools get involved with the Kapiti Home and Garden Show, which this year saw record participation from children of all ages. The Best Preschool Show Garden was won by Kapiti Children’s Centre, while Raumati South School won Best Senior Show Garden. The school garden area was a key attraction at the show and visitors were clearly learning a thing or two from the colourful and very detailed exhibition gardens.

Raumati South School Principal, Graham McDonald says that engaging with the public, and sharing their knowledge has been one of many valuable learning experiences children have gained from the show garden projects.

Every classroom had a part to play in the Ellerslie garden, coming up with ideas, growing plants, making artworks and building structures. Pupils also took part in the fundraising needed for their trip. This was supplemented with a grant from the Kapiti Coast District Council.

The children of Raumati South School are justifiably very proud, both of their show garden successes and of their unique school garden, to which each has their own special way of contributing. Internet savvy ten- year-old, Josh Tristram had the idea of starting a blog, and followed it right through to the end.

The blog features children’s first hand reports and loads of pictures, plus news clips and videos.
This most insightful window into a fantastic community project can be located via www.raumatisouth.school.nz or go directly to www.rsse123.blogspot.co.nz. To follow the full story, be sure to scroll down and click on ‘older posts’ at the bottom of each page.

Raumati South School’s 6x6m garden at the Ellerslie International Flower Show contained fruit, vegetables, herbs and edible flowers as well as a pizza oven and a South African Keyhole garden with its own compost system. There was a colourful butterfly garden area with a ‘living’ roof over it, native plants for lizards, a weta bed, plus a watering system powered by a bicycle. Artworks included a driftwood collage of Kapiti Island, a heart comprised of individual pumice hearts sculpted by the children, and a vibrant outdoor ‘painting’ made from melted recycled plastic. 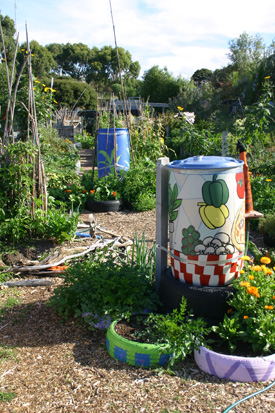 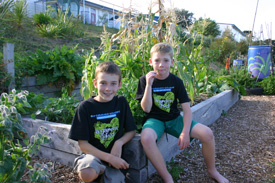 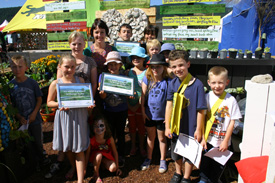 In the winning garden at the Kapiti Coast Sustainable Home and Garden Show with garden design star, Xanthe White, who presented the awards 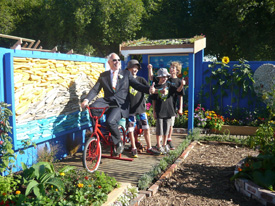 The Mayor takes a test ride at Ellerslie 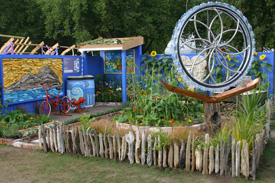 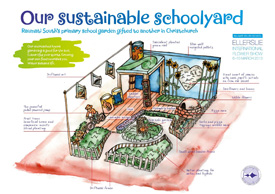